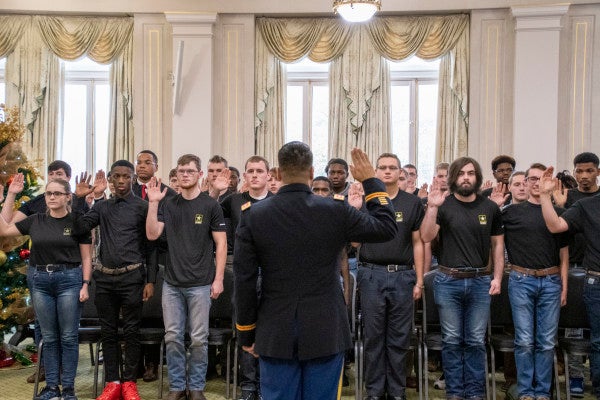 “I will just tell you that this time last year we were in the red, and now we're in the green which is — the momentum's there and we see it continuing throughout the end of the year,” Muth said, adding that the service hit recruiting numbers in February that haven't been hit during that month since 2014.

Army leaders have been reluctant to provide a definitive number for their recruiting goal just yet, beyond saying it's similar to what the service was shooting for last year.

In January at an Association of the U.S. Army event, Army Chief of Staff Gen. James McConville said that the recruiting goal is “in the high 60s,” and that it would become officially set in April.

“What we're trying to do is as we get closer, we may play with that number, to ensure we don't recruit too much,” McConville said. “We don't want to go over by too much because we have to pay salaries for people we may not need, and what we can easily do is put them into next year.”

Dr. E. Casey Wardynski, assistant secretary of the Army for manpower and reserve affairs, told reporters on Wednesday that the final number would be “in the area, probably, of what we did last year.”

“We won't settle that number out until April, May, June timeframe based on how retention's going, attrition's going, because we'll want to flow the extra soldiers that we could bring in the Army this year into that delayed entry pool for next year,” he said.

Muth added on Wednesday that the Army was “on track to be able to exceed anything that we had last year, which was 68,000.”

Mark Cancian, senior advisor with the Center for Strategic and International Studies' International Security Program, told Task & Purpose that he is “surprised that the Army will not announce recruiting goals until April.”

“They have sophisticated models that forecast recruiting and retention given the desired size of the force and the state of the economy. They update the forecast continuously so they always have at least a rough idea about how they are doing,” Cancian said. “The good news is that the Army is apparently on track with recruiting and retention to meet its end strength target for FY 2020.”

“That is a big improvement from two years ago when the Army fell far short and may be an indicator that its new recruiting strategy is working,” he added.

In 2018, the Army was several thousand recruits short of meeting their goal of 76,500. In 2019, however, the service exceeded a recruitment goal of 68,000, resulting in the Army ending that fiscal year with more soldiers than it had planned.

Because of that, the Army has had to adjust its end strength for this year. Though the service originally planned to end the year with 480,000 active-duty soldiers, officials now expect to land at 485,000, according to the Army's latest budget request, released last week.

In fiscal year 2021, the Army plans to add just 1,000 soldiers, with 100 of them being transferred to the newest branch, the Space Force.

Wardynski said on Wednesday that the service plans on hitting 485,000 active-duty soldiers on Sept. 30, the end of fiscal year 2020, without over-shooting.

Since falling short in 2018, the Army has poured resources into ensuring that never happens again. The service launched an Esports team, diving head-first into the digital space, and “What's Your Warrior?”, a new marketing campaign with the hopes of showcasing a variety of jobs available to potential new soldiers.

The service also re-focused recruiting efforts on 22 cities where recruitment has typically seen challenges — something that Muth said on Wednesday has seen more success than he anticipated, especially in cities like New York, Seattle, and Boston that hit their goals last month.

Muth said that recruiters in several of those cities have hit the goals they set for themselves, which would allow the service to reclassify them as “must-win” cities, to “must-keep,” something they didn't expect to be able to do for three to five years after starting that initiative.

“We are much further ahead than we ever thought we would be,” he said.