The top Air Force recruiter is taking the issue of hand tattoos into his own, well, hands. 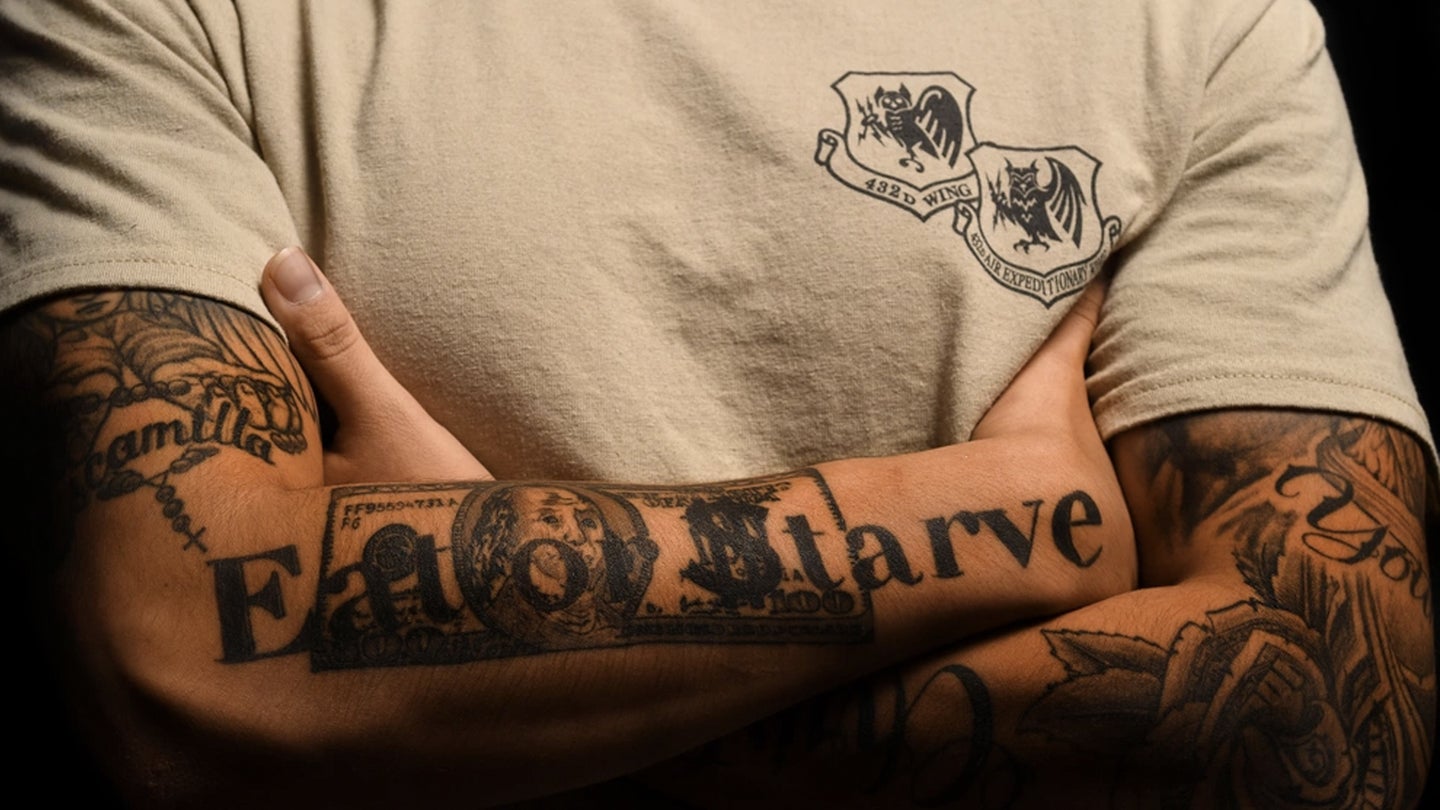 The Air Force has long forbade anything but wedding ring-styled hand tattoos on its airmen and recruits, but the service is reevaluating that policy amid the toughest recruiting year since 1999. Maj. Gen. Edward Thomas Jr., head of the Air Force Recruiting Service, received authority from the Air Force earlier this year to issue waivers to eligible recruits with hand tattoos, and he’s been putting it to good use ever since. His subordinates regularly send him photos of recruits’ hand tattoos for his approval.

“On my iPhone, I get multiple photos a day from my O-6 level group commanders saying ‘hey boss is this okay?’” Thomas told reporters on Wednesday at the Air & Space Forces Association’s Air Space & Cyber Conference at National Harbor, Maryland.

“I say ‘approved,’” said the general, who added that he had evaluated four tattoos that morning. “I’ve approved hundreds of those.”

Thomas recalled how, in 2017, the Air Force set down a new tattoo policy in order to attract new talent and retain airmen.

“The decision was: you can have a full sleeve tattoo but it needed to stop at the hand,” Thomas recalled.

Since then, tattoos have continued to grow in popularity, to the point where Thomas said the Air Force was losing 1,000 recruits a year “in some cases because they may have had very small tattoos on the inside of a finger.”

That might have been okay a few years ago when “frankly, we could afford to lose people around the margins because of finger tattoos, or because of certain medical conditions that we weren’t willing to take a risk on,” the general said.

But 2022 has been a very different year. Between a labor market shortage and a decreasing propensity to serve among the U.S. public, the Air Force can’t afford to be picky over hand tattoos. In January, Thomas compared the recruiting situation to Apollo 13, the 1970 NASA mission where three astronauts nearly died on their way to the moon after an oxygen tank in their ship failed.

“‘Houston, we have a problem,’” Thomas wrote to his force at the time. “Not unlike Apollo 13, we have some mission challenges across Air Force recruiting, [regular Air Force], Guard and Reserve, that we didn’t see coming.”

At the time, the number of people on the Air Force’s “qualified and waiting” list, the list of recruits waiting for a spot in a certain career field to open up, was “about half of what it has historically been,” the general wrote. The “lead conversion,” the rate at which interested possible recruits actually sign the dotted line, was also down.

On top of that, the propensity to serve, meaning the inclination or willingness to serve, among young Americans aged 16 to 21, sits at 9%, which is the lowest point it’s been since 2007, according to a Fall 2021 Department of Defense survey. Another challenge is that since the U.S. military is so small compared to the overall population, fewer Americans have friends or family members who have served, which makes military service less familiar to potential recruits, Thomas said. Lastly, only 23% of Americans aged 17 to 24 can serve in the military without a waiver, Army leaders said earlier this year, which compounds the challenge of attracting and selecting eligible recruits.

It’s not all bad news for the Air Force Recruiting Service. Thomas said his organization now has much better medical data for weighing the risks of bringing in a recruit with conditions such as anxiety, eczema, and asthma. Such conditions may have disqualified recruits from service in the past, but better data has allowed the service to bring in 30% more such recruits without lowering Air Force standards.

This year the Air Force Recruiting Service also brought in a pool of enlisted Space Force recruits that’s 30% female, Thomas said, “which is significantly above” any other military service right now. The recruiting service also exceeded its ten-year average bringing in enlisted airmen in every major non-white demographic, including Black, Hispanic, Asian-American, and female recruits, even as the military and American society as a whole struggles with issues of racial and gender-based bias. The problem, Thomas said, is how to attract a more diverse pool of officers, particularly aviators. In response, the service formed “Det 1” a group of more than 21 airmen solely focused on increasing rated officer diversity in the Air Force. In the Air Force, rated career fields include pilots, combat systems officers, air battle managers and drone pilots. The Air Force Recruiting Service will also partner with the research group RAND to conduct an even closer analysis on how to best use its resources and how to recruit for the Air Force special warfare community, Thomas said.

Late last month, the general said the Air Force Recruiting Service is also considering granting waivers for recruits who test positive for THC, the psychoactive substance in marijuana, at Military Entrance Processing Stations, Air Force Times first reported. Previously, testing positive for THC would permanently bar a candidate from ever joining the branch, Thomas said. The possible change is meant to better align the Air Force recruiting process with the fact that most states now allow medical or recreational marijuana use.

If a recruit tests positive, the local recruiting squadron commander “is able to evaluate the circumstances and if we believe it was due to unintended exposure or the residual effects of THC in your system, we can waive that and let them go test again,” the general said at the Air, Space & Cyber Conference.

The possible change “is not about folks who are not honest with their recruiter and they smoke marijuana and they went in the next day or next week to MEPS,” Thomas said. “That’s not who this is for.”

Of course, the other possible Air Force policy change in the works has to do with hand tattoos. The general said the current set-up where he evaluates every recruit’s hand tattoo is “a very temporary situation.” The Air Force Recruiting Service is working with the Air Force personnel office to make a permanent policy change.

“These aren’t morality issues,” Thomas said. “These are simply being able to align with the society in which we serve.”

There are still standards: the tattoos must not cover more than 25% of a recruit’s hand, Thomas said. But it may not be that way forever.

“Will that be different in a year or five?” he asked. “It very well may be.”