The U.S. Space Force may have a growing command structure and expansive doctrine, but it's missing something critical to the sixth branch of the U.S. armed forces' success: people 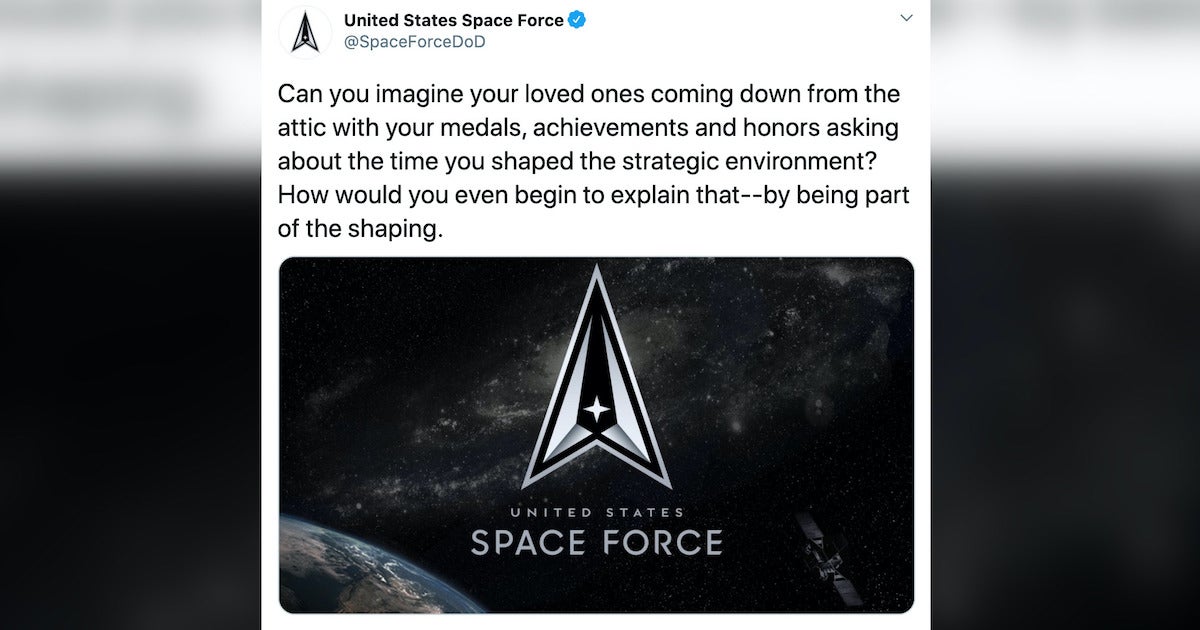 The U.S. Space Force may have a growing command structure and its first-ever doctrine, but it's missing something critical to the sixth branch of the U.S. armed forces' success: people.

Even though more than 8,500 active-duty airmen volunteered to join the Space Force from the Air Force in May alone, the new service branch is in the middle of a major recruiting drive that includes messages like, well, this one:

Can you imagine your loved ones coming down from the attic with your medals, achievements and honors asking about the time you shaped the strategic environment?
How would you even begin to explain that–by being part of the shaping. pic.twitter.com/EaTooBQz1B

First of all: this makes no fucking sense.

Second of all, we're unclear exactly what “medals, achievements and honors” the Space Force is talking about exactly — namely because they don't exist yet. And the nascent service branch only started launching missions back in May with the launch of a satellite from Cape Canaveral in Florida.

“It was a clumsy attempt to talk about the future and the significance of what a small group of people are doing, standing up our nation's newest branch of service,” Maj. Nick Mercurio, a Space Force spokesperson, told Task & Purpose. “We're taking a clean sheet approach to building the Space Force.”

We weren't the only ones who look at the Space Force's latest message as a giant bong rip:

This makes no sense.

I mean I get where you are going with this, but seriously you need new copywriters because this thing creeks.

was this tweet written by letting predictive text finish the sentences

Anyway, marketing is hard! But here's a word of advice to the Space Force PAOs (and I know you're reading this): If your copy could resemble that from the Netflix series Space Force and not the U.S. Space Force, perhaps reconsider your approach.

Related: Who did it better: the real Space Force recruiting spot or the trailer for Netflix's 'Space Force'?