"The one piece of advice that I would give to Steve Carell is to get a haircut. He’s looking a little too shaggy if he wants to play the Space Force chief," said the actual chief of the Space Force, Gen. John W. Raymond. 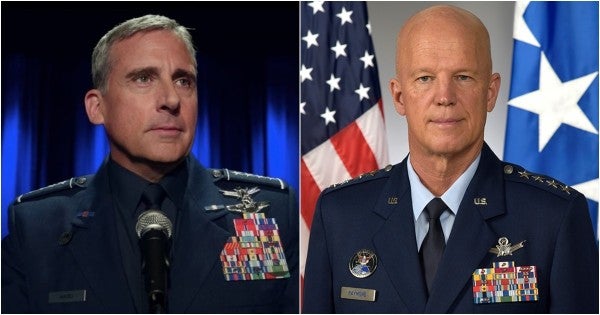 Just a day after the first trailer for Netflix’s workplace comedy, Space Force, premiered, the head of the actual Space Force, Gen. John W. Raymond, has a suggestion for the series’ star and co-creator, Steve Carell: Get a haircut.

“So, I have seen the trailer,” Raymond said during a virtual press conference on Wednesday, where he was joined by Air Force Secretary Barbara Barrett. “The one piece of advice that I would give to Steve Carell is to get a haircut. He’s looking a little too shaggy if he wants to play the Space Force chief.”

Created by Greg Daniels and Carell (The Office), Space Force focuses on the founding of America’s newest military branch, and those poor souls charged with actually making that ambitious dream a reality.

The 10-episode series closely follows Gen. Mark Naird — a highly decorated Air Force general played by Carell — whose hopes of being the next Secretary of the Air Force are dashed by a surprise appointment as the first chief of the newly established Space Force.

It gets better: Noah Emmerich, Jane Lynch, Diedrich Bader, and Patrick Warburton will join Carell as chiefs of staff in the series for the Space Force’s sibling branches.

Given the show’s popularity, several people asked the chiefs of the Air Force and Space Force via Twitter what they thought of the trailer for Netflix’s upcoming parody, and whether its theme song, Kokomo by the Beach Boys, would be a fitting anthem for the new service.

Here’s how Barrett and Raymond responded:

Barrett: “Kokomo. We’re all into Kokomo.”

Raymond: So, I have seen the trailer. The one piece of advice that I would give to Steve Carell is to get a haircut. He’s looking a little too shaggy if he wants to play the Space Force chief.

It was funny. Probably a year ago, I was at home and I was looking at my bank account and I saw where dollars were being taking out for Netflix. And at the time – please Netflix, don’t come after me – I didn’t watch Netflix. And I said: ‘Why am I paying for this every month?’ And I said, ‘I’m going to stop.’ I cut it off.

Within about 32 seconds of stopping that, all three of my children from all the different places in the United States came up on the net and said: ‘Hey what happened?’ Well, they were clearly watching. And so I immediately put that back on.

And then about a few months later, one of my daughters texted me and said: ‘Hey, Space Force is really getting big … and Steve Carell is going to play you.’ And I said: ‘Ah, that can’t be. He doesn’t look like me.’

So, I was hoping for Bruce Willis but Steve Carell is a great actor and I tell you I love this show. We’re looking forward to it.”

Netflix’s Space Force premiere’s this month on May 29.