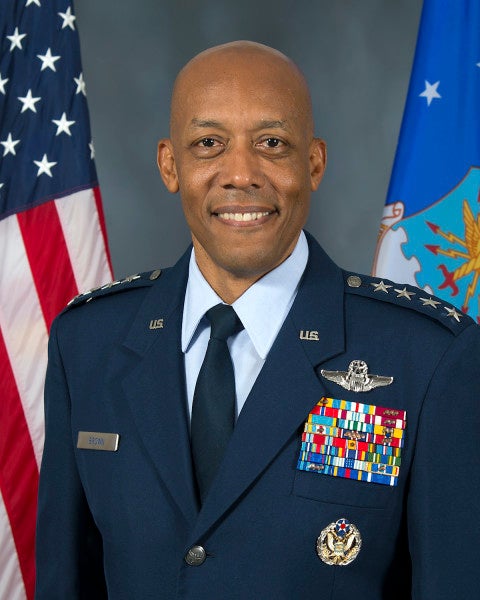 The Air Force could be led by an African-American general officer for the first time in the service’s history now that Gen. Charles Q. Brown Jr. has been nominated to be the next Air Force chief of Staff.

“I am truly honored and humbled by the nomination to serve as the Air Force’s 22nd chief of staff,” Brown said in an Air Force news release. “If confirmed, Sharene and I look forward to building upon the legacy of Gen. Dave and Dawn Goldfein and the many airpower giants before who have served our Air Force and our nation with such dedication.”

Widely known as “CQ,” Brown is an F-16 pilot who has racked up more than 2,900 flying hours – including 130 combat hours, according to the Air Force.

He has played a major role in air operations in Libya and against ISIS and served as deputy commander of U.S. Central Command from July 2016 to July 2018.

“CQ Brown is one of the finest warriors our Air Force has ever produced. He’s led worldwide – in the Pacific, Europe, the Middle East and Africa,” Goldfein said in the Air Force news story. “When it comes to global, operational savvy there’s nobody stronger. Congratulations to Gen Brown on his nomination to be our next chief.”

If confirmed by the Senate, Brown would lead the Air Force at a time when the U.S. military is focused on 'great power competition' against China and Russia while ISIS, Al Qaeda, and other terrorist groups have yet to be fully defeated.

Brown would also be stepping into the job as Space Force is beginning to grow. Roughly 6,000 airmen are expected to be assigned to Space Force by the end of the year.

“Gen CQ Brown is the right strategic leader at the right time for the United States Air Force,” Gen. Jay Raymond, Chief of Space Operations, said in the news release. “He clearly understands the evolving and complex strategic environment we face and recognizes the importance of integrating across all domains to compete, deter and win. On behalf of the 16,000 men and women assigned to the United States Space Force, congratulations on the nomination!”