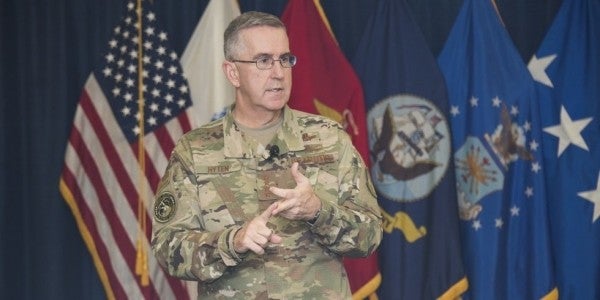 Air Force Gen. John Hyten's nomination as the next vice chairman of the Joint Chiefs of Staff appears to be back on track after sexual allegations made by a former subordinate surfaced earlier in the month.

Currently the head of U.S. Strategic Command, Hyten will appear before the Senate Armed Services Committee on July 30, according to the committee's website.

Defense News reporter Joe Gould first reported on Thursday that Hyten's nomination was moving forward after senators interviewed him in private about the allegations made by a military officer, who reportedly claimed that Hyten sexually assaulted her and then tried to ruin her career for rebuffing his unwanted advances.

“Ahead of this hearing, the members of the Senate Armed Services Committee have devoted many hours to reviewing General Hyten and his nomination, at four executive sessions held by the committee and on their own time,” Sen. James Inhofe (R-Okla.) said in a statement on Thursday. “Through a fair, thorough and methodical process, each member was able to ask questions, receive answers, review documents, listen to testimony, conduct analysis and express their opinions. Next Tuesday, the members of the committee will have the opportunity to consider General Hyten's nomination in a public forum.”

Although an Air Force investigation found there was not enough evidence to support claims of misconduct by Hyten, his nomination had been imperiled after lawmakers were briefed about the woman's accusations on July 10.

It is not clear whether any lawmakers will block Hyten's nomination going forward.

“I still have questions as to why he has been treated differently than other high ranking officers – or any officers, for that matter – who have had similar accusations levied against them,” said Duckworth, a former Army pilot who lost both legs in 2004 when her helicopter was shot down in Iraq.

“I found her very believable,” Duckworth continued. “I do think it becomes a he-said/she-said kind of a situation. But I have some questions after listening to her testimony.”

Duckworth also indicated she might be on the fence about Hyten's nomination, saying, “There are many other officers who could do this job.”

SEE ALSO: Military sexual assaults have reached a four-year high as the Pentagon downplays its failures