Vindman and his twin brother were escorted from the White House in February. 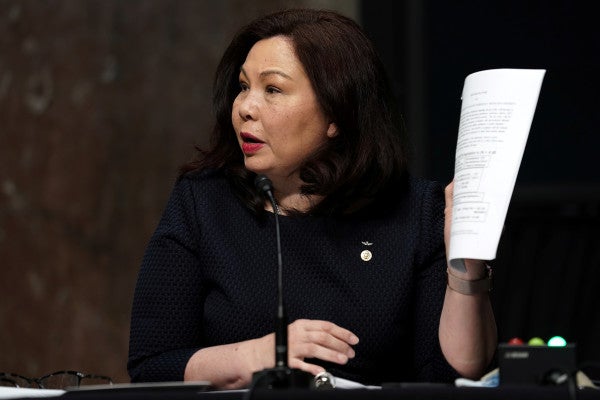 WASHINGTON (Reuters) – Democratic U.S. Senator Tammy Duckworth said on Thursday that she would put a hold on the confirmation of over 1,000 military promotions until Defense Secretary Mark Esper provided assurances on the promotion of a former White House aide who testified in President Donald Trump’s impeachment trial.

Lieutenant Colonel Alexander Vindman, who provided some of the most damaging testimony during an investigation by the U.S. House of Representatives into Trump's dealings with Ukraine, is up for a promotion to colonel. However, there is concern his promotion could be affected due to political reasons.

“Our military is supposed to be the ultimate meritocracy. It is simply unprecedented and wrong for any commander in chief to meddle in routine military matters at all,” said Duckworth, a former Army National Guard helicopter pilot who lost both legs when she was shot down in Iraq in 2004.

She is also reportedly under consideration by Democratic presidential candidate Joe Biden to be his running mate.

Duckworth intended to place a hold on 1,123 senior military service members' promotions until Esper “confirms in writing that he did not, or will not, block the expected and deserved promotion of Lieutenant Colonel Alexander Vindman to colonel,” a statement said.

The senator told reporters on Thursday that her blanket hold applies to all promotions to O6 and above with the exception of Army Gustave F. Perna, who has been nominated to lead efforts to produce a vaccine for the novel coronavirus (COVID-19) by January 2021.

“For the most part, the other folks who are routine promotions will move forward,” Duckworth said on a conference call.

She also said she has plans to lift her hold by a certain date if she does not hear back from the Defense Department on Vindman’s promotion.

“I think it’s unprecedented that the commander in chief of our United States military would take a personal vendetta he has against one officer – who did his job when he was subpoenaed, according to the laws of this country – to prevent his promotion that he has earned from moving forward – a promotion that he was recommended for by his superior officers,” Duckworth said.

Duckworth's action would make it far more difficult and time-consuming to approve such promotions, especially given how little time the Senate has before the November elections.

Vindman and his twin brother were escorted from the White House in February.

“We sent him on his way to a much different location, and the military can handle him any way they want,” Trump said at the time.

Esper said in November that Vindman should not fear retaliation over his testimony.