Duckworth ends hold on promotions after Army and DoD confirm Lt. Col. Vindman’s promotion was sent to the White House

'Donald Trump’s unprecedented efforts to further politicize our military by retaliating against Lt. Col. Vindman — for doing his patriotic duty of telling the truth under oath— are unconscionable.' 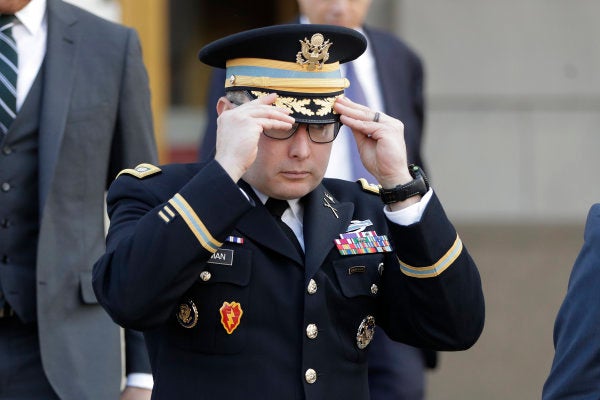 Sen. Tammy Duckworth (D-Ill.) has lifted her hold on more than 1,000 promotions to the rank of O-6 and above after learning that both the Army and Defense Department approved Lt. Col. Alexander Vindman’s promotion to full colonel, a news release from the senator’s office says.

Duckworth has received written confirmation that an Army promotion board selected Vindman to advance and the Army promotions packet was formally submitted without White House interference, the news release says.

“I’m glad the Department of Defense was finally able to set the record straight that Vindman had earned and was set to receive a promotion to colonel,” Duckworth said in a statement. “We must always protect the merit-based system that is the foundation of our Armed Forces from political corruption and unlawful retaliation.”

Related: The Army approved Vindman’s promotion months ago and cleared him of ‘allegations of misconduct’

Duckworth, who is reportedly being considered as former Vice President Joe Biden’s running mate in November’s presidential election, had blocked the nominations for 1,123 promotions starting on July 2 amid media reports that the White House was trying to pressure the Army and Pentagon to stop Vindman’s promotion.

VIndman was a key witness in President Donald Trump’s impeachment inquiry. He testified that Trump explicitly pressured Ukraine’s president to open an investigation into Biden and his son Hunter in exchange for a military aid package that the president had frozen.

Trump and his allies in the media launched a smear campaign against Vindman as a result, calling him a “Never Trumper.” Vindman was dismissed from the National Security Council in February and he announced on July 8, and his attorney said at the time that the Army had made clear that Vindman faced “limited” opportunities going forward.

Task & Purpose has confirmed that both Army Secretary Ryan McCarthy and Defense Secretary Mark Esper had approved including Vindman in a list of recommended promotions that had been sent to the White House before Vindman announced his retirement.

Earlier, the White House had requested the Army Inspector General's office look into any “allegations of inappropriate behavior” by Vindman, a defense official told Task & Purpose on Wednesday. The inquiry quickly found there were no substantiated claims of wrongdoing against Vindman.

“Donald Trump’s unprecedented efforts to further politicize our military by retaliating against Lt. Col. Vindman — for doing his patriotic duty of telling the truth under oath— are unconscionable,” said Duckworth, who lost both of her legs when her helicopter was shot down over Iraq in 2004.