"We take this very, very seriously." 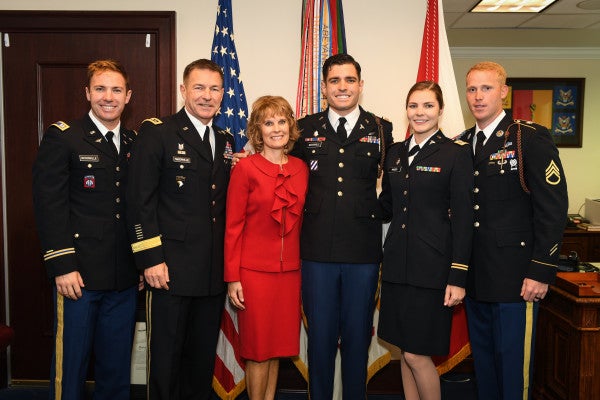 Army Chief of Staff Gen. James McConville said on Tuesday that combat was a “last resort” for the U.S. military's senior leaders, offering a different perspective than President Donald Trump who said on Sunday that Pentagon leaders “want to do nothing but fight wars.”

Though he originally declined to comment on Trump's remarks when asked during a Defense One 'State of the Army' discussion, citing the Army's apolitical stance, McConville eventually stated that for many senior military leaders, sending troops into combat is something taken “very, very seriously.”

McConville himself is one of those leaders with family in the service: all three of his children, as well as his son-in-law, currently serve in the Army, and his wife, Maria, is an Army veteran.

“I can assure the American people that the senior leaders would only recommend sending our troops to combat when it's required for national security and a last resort,” McConville continued on Tuesday. “We take this very, very seriously on how we make our recommendations.”

On Monday, Trump said that the “top people in the Pentagon” don't like him because “they want to do nothing but fight wars so that all of those wonderful companies that make the bombs and make the planes and make everything else stay happy.”

“We're getting out of endless wars,” Trump said. “Some people don't like to come home. Some people like to continue to spend money. One cold-hearted globalist betrayal after another, that's what it was.”

While the assertion that Pentagon leaders want war in order to benefit the defense industry has long been a controversial subject in U.S. military history, there's no doubt that the Defense Department is today deeply entangled with the global defense industry.

In 2018, the Project On Government Oversight published a report which said that over a 10-year span, at least 380 high-ranking DoD officials and military officers “shifted into the private sector to become lobbyists, board members, executives, or consultants for defense contractors.”

And it's not unheard of for people to wind up back at the Pentagon after a stint with industry. Indeed, Trump's last two picks for Defense Secretary came from the defense industry: former Acting Secretary of Defense Patrick Shanahan served as a senior vice president at Boeing, and current Secretary of Defense Mark Esper was a top lobbyist at Raytheon.

The so-called revolving door between the Pentagon and defense industry has been criticized by Democrats as well. During Esper's confirmation hearing, Sen. Elizabeth Warren (D-Mass.) grilled him over his ties to Raytheon, calling it a conflict of interest.

“This smacks of corruption, plain and simple,” Warren said.

Exchange between @SenWarren and Defense Secretary Nominee @EsperDoD on @Raytheon, ethics, waivers and conflicts of interest.

ESPER: "I think this is a good debate –"

WARREN: "I'm not trying to have a debate." pic.twitter.com/iu1Chu17ie