'They want to do nothing but fight wars so that all of those wonderful companies that make the bombs and make the planes and make everything else stay happy.' 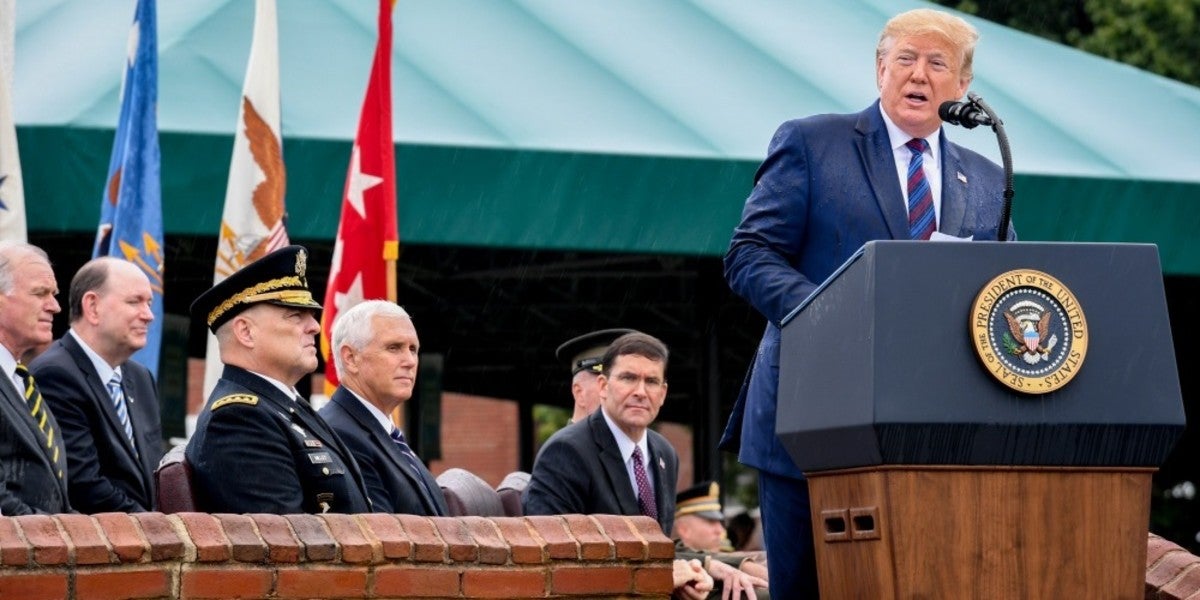 “I'm not saying the military's in love with me – the soldiers are,” the president said at a White House news conference. “The top people in the Pentagon probably aren't because they want to do nothing but fight wars so that all of those wonderful companies that make the bombs and make the planes and make everything else stay happy.”

Trump also said that his desire to withdraw all U.S. troops from Syria now that the Islamic State no longer holds any territory has put him at odds with military leaders.

“I said: That’s good; let’s bring our soldiers back home,” Trump said. “Some people don’t like to come home. Some people like to continue to spend money.”

A Pentagon spokeswoman referred questions about the president’s remarks to the White House. The Joint Staff declined to comment for this story.

Trump’s latest comments came after The Atlantic reported on Sept. 3 that senior aides had head the president make disparaging remarks about fallen U.S. troops, wounded warriors, the late Sen. John McCain, and others.

During a 2018 visit to France, Trump reportedly referred to the U.S. Marines killed at Belleau Wood during World War I as “suckers,” according to The Atlantic. The prior year, when the president visited the gravesite of the son of retired Marine Gen. John Kelly at Arlington National Cemetery, Trump reportedly asked Kelly why fallen troops gave their lives for the country.

“I don’t get it,” The Atlantic quoted Trump as saying. “What was in it for them?”

On Monday, the president once again denied that he had ever been disrespectful to troops or fallen service members.

The Atlantic reported that Trump did not visit the Aisne-Marne American during the 2018 trip because he believed the fallen troops were “losers.” But the president said on Monday that he couldn’t fly to the cemetery due to the bad weather and the Paris police had asked the Secret Service not to motorcade through Paris.

“We had the worst weather – I think it was as bad a rain as I’ve just about ever seen,” Trump said at the news conference. “And it was the fog, you literally, you couldn’t see – I walked out; I didn’t need someone to tell me. I walked out and I said there is no way we can take helicopters in this. I understand helicopters very well. And they said: No sir, that’s been cancelled.”