Defense officials backtrack on Trump’s claim that Gen. Milley is ‘in charge’ of military response to violent protests

Army Gen. Mark Milley has not assumed command of a federalized effort to curb rioting. 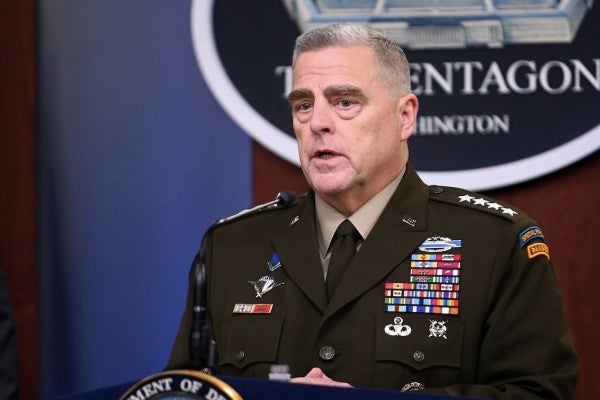 One day after President Donald Trump said he was putting the chairman of the Joint Chiefs of Staff in charge of the military response to violent protests across the nation, anonymous defense officials used the cloak of anonymity to try to put the genie back in its bottle.

President Donald Trump told governors on Monday that he felt local authorities had not done enough to contain the domestic unrest, according to the Washington Post. The president also said that he was putting Army Gen. Mark Milley “in charge” of the overall response, but he did not explain what responsibilities Milley would have.

Defense officials spoke on condition of anonymity amid confusion about what the U.S. military’s role is in quelling violent protests, which have exploded since video emerged last month showing a white Minneapolis police officer with his knee on the neck of George Floyd, who is black, despite Floyd’s pleas that he could not breathe. Floyd died a short time later.

Senior defense officials stressed on Tuesday that Milley’s role as a military advisor to the president has not changed and governors continue to have control over the National Guardsmen, who have been mobilized during the unrest.

General Milley, chairman of the joint chiefs of staff, walking the streets of Washington DC right now. Briefly spoke to say he is observing the situation. pic.twitter.com/fHcYOTYMzN

“Both the secretary of defense and chairman are in communication with the chief of the National Guard Bureau and several state adjutant generals about their support to states,” one senior defense official said.

However, Milley’s role in the law enforcement and military response to riots and protests appeared murky on Monday when he accompanied Trump during his walk from the White House to nearby St. John’s Church after police moved peaceful protesters out of Lafayette Square by using tear gas and concussion grenades.

Dressed in his camouflage uniform, Milley walked the streets of Washington, D.C., afterward, telling reporters: “We’ve got the D.C. National Guard out here and I’m just checking to see how well they’re doing. That’s all.”

One senior defense official said that Milley and Defense Secretary Mark Esper were at the White House to brief the president and they did not know that police intended to clear Lafayette Square of protesters.

“The president indicated an interest in viewing the troops that were outside and the secretary and the chairman went with him to do so,” the senior defense official said. “At that point, they were part of the group that was with the president as he continued through Lafayette Park.”

Let's be clear what you're seeing here. Someone ordered a MEDEVAC helicopter to hover over crowds and dust them out or blow them away. They're using an air ambulance to intimidate people. What's next? Driving ambulances into crowds? What Army leader agreed to this? Names! https://t.co/ZylSlGuRMa

Federal and local law enforcement continue to have the lead for operations in Washington, D.C., although some active-duty units are in the region, the official said.

Those active-duty troops include military police and engineers, but the Pentagon is refusing to say which units they came from and how many have been deployed, a third senior defense official said.

It was not immediately known on Tuesday whether helicopters that flew show of force missions against protesters overnight came from National Guard or active-duty units.

One Army UH-72 Lakota flew particularly low over protesters. The helicopter is used to evacuate wounded troops from the battlefield. Its red cross was clearly visible.