Investigation into why National Guard helicopters buzzed protesters in D.C. stuck in limbo

“The Department is committed to a complete and thorough investigation," Pentagon spokesman Army Lt. Col. Chris Mitchell said on Tuesday. "The investigation is ongoing and we do not have a timeline on a completion date" 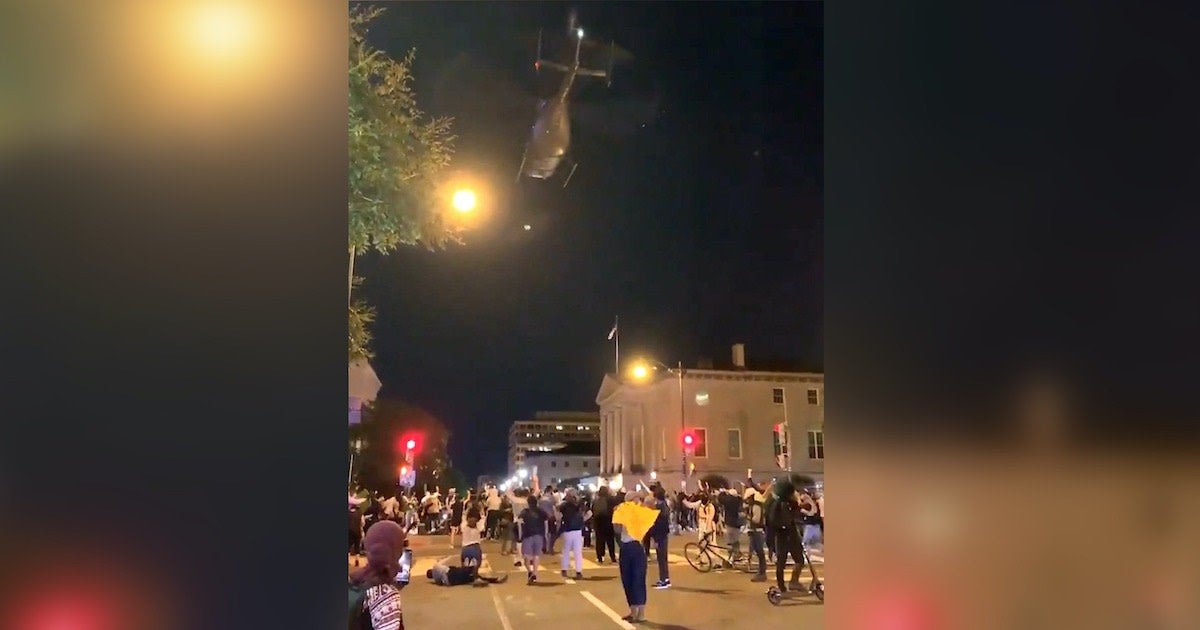 The release of the District of Columbia National Guard’s investigation into whether any of its helicopters broke any safety procedures by flying low over protesters in Washington, D.C., continues to be delayed pending the Defense Department Inspector General’s Office review.

“Our oversight review is ongoing,” inspector general’s office spokeswoman Dwrena Allen told Task & Purpose on Monday. “I cannot give you a specific timeline for when it will be completed.”

Army National Guard helicopters flew what looked like show of force missions on the night of June 1 as defense officials were reportedly trying to convince President Donald Trump to let the National Guard deal with protests in the nation’s capital instead of deploying active-duty troops.

The following day, Defense Secretary Mark Esper ordered an investigation into why one of the helicopters hovered just above the heads of protesters. The Washington Post estimated that the Army National Guard medical evacuation helicopter was just 45 feet above the crowd.

The head of the District of Columbia National Guard told reporters in June that the helicopter had not been ordered to disperse the protesters by using its rotor wash.

And on July 9, Esper told the House Armed Services Committee that the investigation had been completed and the DoD OIG was expected to review it.

“It should be available next week to the committee,” said Esper, who then asked Army Gen. Mark Milley, chairman of the Joint Chiefs of Staff to weigh in.

“That’s correct: DoD IG has to do their review,” Milley said. “So I would expect it pretty shortly, like within days, perhaps early next week.”

More than a month later, that still has not happened.

“The Department is committed to a complete and thorough investigation,” Pentagon spokesman Army Lt. Col. Chris Mitchell said on Tuesday. “The investigation is ongoing and we do not have a timeline on a completion date.”

Following the death of George Floyd at the hands of Minneapolis police officers, demonstrations against police brutality erupted across the country. On May 31, National Guardsmen helped protect the White House when a crowd of protesters converged there, prompting the president to be rushed to a bunker.

Trump repeatedly threatened to deploy active-duty troops to restore order in cities dealing with protests as well as looting. That reportedly brought him into conflict with Esper, who told reporters on June 3 that he did not think the president needed to invoke the Insurrection Act.

But initially, the Defense Department considered deploying active-duty troops to Washington, D.C., when the protests first broke out because the Pentagon was not sure it could mobilize enough National Guardsmen quickly enough, McCarthy told reporters in June.

“We came right up to the edge of bringing active-duty troops here and we didn't,” McCarthy said on June 7. “You had the 82 Airborne Division at Fort Belvoir, [Virginia]. That’s how close we were.”

Related: Former Marine commandant on nationwide protests: 'The time for being silent has passed'