Former Marine commandant on nationwide protests: ‘The time for being silent has passed’

"We are better than this. Stand up for what is right." 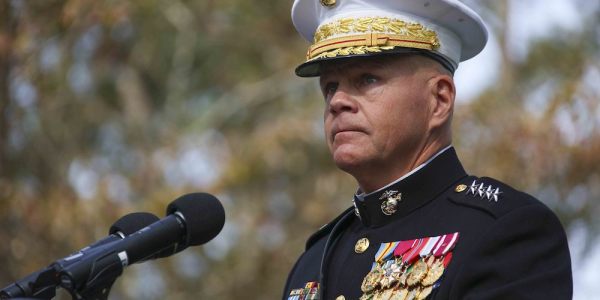 Former Marine Commandant Gen. Robert Neller has written an open letter urging all Americans to “stand up for what is right” in the wake of protests over the death of George Floyd at the hands of Minneapolis police officers.

Neller, 67, who stepped down as the top Marine less than a year ago, published the letter on Wednesday to his LinkedIn account, which opened with a quote from Henry Longfellow, a popular 19th century American poet: “Ships that pass in the night, and speak each other in passing, only a signal shown, and a distant voice in the darkness; so on the ocean of life, we pass and speak one another, only a look and a voice, then darkness again and a silence.”

Neller confirmed the letter's authenticity to Task & Purpose on Thursday.

Neller wrote that he was deeply saddened after watching the video of Floyd, an unarmed black man who pleaded with officers that he was unable to breathe as one of them, Derek Chauvin, kept a knee on Floyd's neck for nearly nine minutes before his death.

“I cannot get out my mind the lack of emotion on the faces of the officers as Mr. Floyd said repeatedly, 'I can’t breathe.' And all this transpiring while others called out for the officers to let him up, though none physically intervened,” Neller wrote.

“At the same time, it is with some understanding but again sadness I watch the destruction of neighborhoods in our Nation as demonstrators, most local citizens, but including some professional agitators, express their anger and frustration over another killing of a black man by police that, to the great majority of Americans it was clear, did not have to die. At the same time some violate the law by attacking police, looting and burning businesses in their communities, many of which are unlikely to return or rebuild. You are justifiably angry.”

So what do we do now? Neller asked, writing that Americans might wait for the protests to pass like Longfellow's ships in the night, or instead, “stand up for what is right and reasonable.”

“The time for being silent has passed, at least for me,” Neller wrote. Calling the aftermath of Floyd's death a “turning point for change,” Neller offered his thoughts on the path forward with messages individually tailored toward white and black Americans, police officers, national political and cultural leaders, and racists, which he said were “on the wrong side of history.”

To white Americans, Neller wrote that they may not be racially prejudiced, but “you have to try as best you can to understand the views of people of color who are just tired of the real injustices they live with every day.” Ask them to tell you their stories, Neller suggested. “Listen and change.”

Addressing black Americans, Neller said “your anger is understandable and justified,” referencing black men having to die for “inexplicable reasons.” Yet he urged peaceful protests while not letting others “take your message and turn it against you” in reference to those engaging in violence.

“The great majority of America hears and agrees with you,” Neller wrote.

“You have a very difficult job,” Neller wrote of law enforcement officers, asking them to continue doing their duty with professionalism and dedication. Though he said the great majority already do so, Neller asked that officers “don't stand there,” but engage and weed out any misbehavior in their ranks.

“Don’t stand there…. Engage and stop it,” Neller wrote. “You know who has these beliefs and attitudes in your force. You must get them to change or leave. Always use the minimum force to counter any threat. Stay safe out there. Protect and serve.”

Related: Here are all the current and former military leaders blasting Trump’s response to nationwide protests

Neller also urged national political and cultural leaders to continue to speak out for justice and fairness, while chiding racists as “backwards.”

“I accept that there is likely nothing that I can say to change your views but understand that this a Nation of laws and your views are not in compliance with same. You are on the wrong side of history. I pity you.”

Neller closed with a call for unity, asking that we protect free speech and peaceful demonstration but not tolerate destruction of lives and property. What happened to George Floyd was not right, Neller wrote, adding that his death needs to count for something.

“We are better than this. Stand up for what is right,” Neller wrote. “We can no longer be ships in the night and just move on. Love and protect your neighbor. Stay safe.”

Neller is not the only current or former military general to share his views. A handful have spoken out in recent days, including two former chairmans of the Joint Chiefs. On Wednesday, former Defense Secretary James Mattis wrote that he was “angry and appalled” by the events of the last week, while urging Americans to unite without President Trump, since, Mattis wrote, he was “the first president in my lifetime who does not try to unite the American people.”

Related: James Mattis: Trump ‘tries to divide us’ and we must reject those who ‘make a mockery of our Constitution’

You can read Neller's full letter on LinkedIn here.