‘Da 5 Bloods’ takes on wars in Vietnam and at home 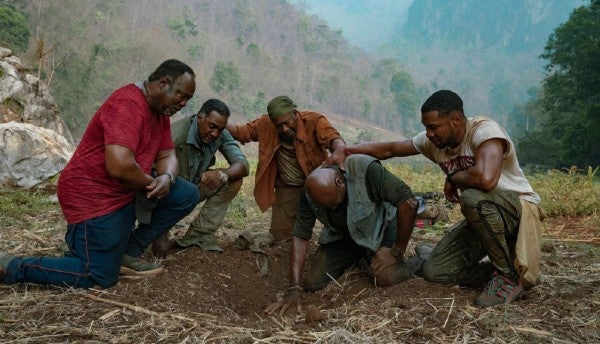 As George Floyd-inspired protests rage in the streets, Academy Award-winning writer-director Spike Lee delivers another cinematic piece of black history. But for all its timeliness, “Da 5 Bloods” is confusing. Is it a documentary, a semi-comic Vietnam-fave-movie mixtape or is it “The Treasure of the Sierra Madre” Hanoi-style?

The Spike Lee joint streaming on Netflix, “Da 5 Bloods” reunites four Vietnam veterans, including one apparent PTSD victim named Paul (Delroy Lindo) who became a MAGA-hatted Donald Trump supporter, and his aggrieved son David (Jonathan Majors). These aging men, plus one, come together for a trip back to Vietnam ostensibly to find the remains of Norman (Chadwick Bosemen), a fellow soldier who was their friend, teacher and spiritual guide and bring him home.

The group’s car dealerships-owning member Eddie (Norm Lewis) is paying the tab. Otis (Clarke Peters) has left something else behind in Vietnam. Melvin (Isiah Whitlock Jr.) is along for the ride, but makes sure to tell a story he may have heard from an old war movie. “Da 5 Bloods” started out as a screenplay entitled “The Last Tour” with white protagonists and, yes, Oliver Stone attached.

When that fell through, Academy Award winner Lee (“BlacKkKlansman”) stepped in and brought his “BlacKkKlansman” co-writer Kevin Willmott with him. After listening to Marvin Gaye’s eerily timely “Inner City Blues” and seeing Bobby Seale and Angela Davis and other Vietnam War-era faces in archival footage (the film ends with a real-life “Black Lives Matter” protest), we are in present day Ho Chi Minh City.

The fictional veterans dine, drink and reminisce under watchful eyes, and Otis meets the daughter, if not cliche, he never knew about (really?). The film rather clumsily cuts between the present time, including a blazing shootout, and “Platoon”-like combat scenes from the past, featuring Lindo, Whitlock, Peters and Lewis, who are not “de-aged,” along with Boseman. The men embark upon a river journey into the jungle to the tune of “The Ride of the Valkyries.” Will someone actually say, “We don’t need no stinking badges?” Yes.

The truth is the men are also after a box of gold the CIA was planning to use to pay the mountain warriors who once fought the French to fight for us. History has way of repeating itself, and Lee has always been something of a trickster. Even if he is not always in command of his tone here, we are reminded that while African-Americans were 11% of the population of the United States at the time, they disproportionately represented 30% of the soldiers in Vietnam.

Also in the mix are a young Vietnamese guide named Vinh (Johnny Nguyen), who is good with a gun, Jean Reno as a Sydney Greenstreet-type racketeer and Veronica Ngo as Hanoi Hannah.

Lindo, who has worked several times with Lee, is this film’s Fred C. Dobbs (Humphrey Bogart), as well as its mad Col. Kurtz (Marlon Brando). His Paul will deliver fever dream-like monologues directly to the camera. “I see ghosts,” says Paul.

“Da 5 Bloods” is many things, a derivative, too familiar Vietnam war movie, a genuine history lesson and a love letter to “Apocalypse Now” with plugs for Curtis Mayfield and Morehouse College.

It is also a reminder of a great sacrifice made on behalf of a country that must see ghosts, too.