Medal of Honor recipient Daniel Inouye's life reads like the origin story of a super hero, so it seems only natural that he should recieve the comic book treatment. 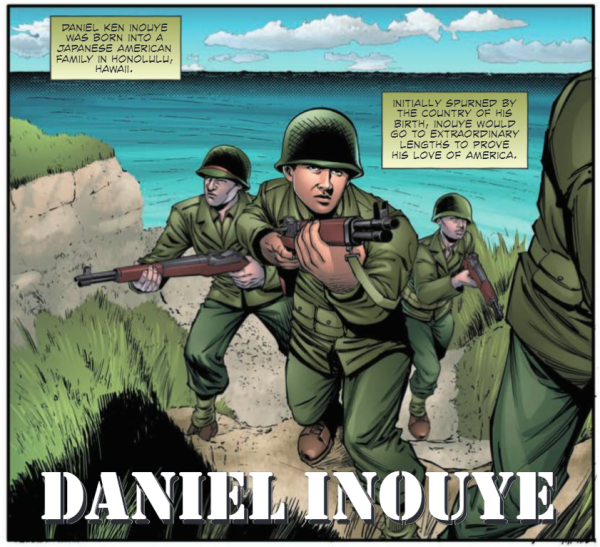 Daniel Inouye's life is littered with examples of triumph in the face of adversity, personal sacrifice, and acts of physical and moral courage, both on and off the battlefield.

As a civilian, Inouye treated the wounded during the attack on Pearl Harbor. He enlisted in the Army at a time when the loyalty of Japanese Americans like him was in constant question. And during World War II, he distinguished himself on battlefields across Europe, no where more so than in Italy, where he led a frontal assault against a heavily defended German position, and was grievously wounded, twice, yet never once faltered.

He went on to receive the Medal of Honor, the nation's highest award for valor, and became the first Japanese American to be elected to the United States Senate.

It seems only fitting then that Inouye, whose life reads like the origin story of a super hero, should get the comic book treatment.

The newest addition to the Association of the United States Army's Medal of Honor  series was created by a cast of prolific comic book creators whose work spans the DC and Marvel universes.

“I was so pleased to be able to tell the senator's story and describe part of the history of the 442nd,” said Chuck Dixon (Batman, The Punisher, The ‘Nam), who wrote the script for the graphic novel.

“My father-in-law was in that same theater with the 10th Mountain as they chased the SS up into the Italian Alps,” Dixon Told task & Purpose. “He told me lots of stories about the Nisei soldiers and how tough a unit they were. The incredible personal story of Senator Inouye and the service and sacrifice of the Japanese-American troops needs to be better known by all.”

Leading the way, Inouye crawled up the treacherous mountain slopes, until he was within five yards of the enemy position. From there, he hurled two grenades — destroying it outright — before turning his Thompson submachine gun on the next gun nest and taking out the enemy soldiers.

During the battle, Inouye was wounded multiple times, first by a sniper's bullet, and then by a grenade, which shattered his right arm. Despite his injuries, which would result in the loss of his arm, Inouye refused to leave his men, and continued fighting until they had won the day.

For his actions under fire, Inouye was awarded the Distinguished Service Cross, which was later upgraded to the Medal of Honor, on June 21, 2000.

After the war, he returned to his home-state of Hawaii, and went on to become the first Japanese American elected to the United States Senate.

The Medal of Honor graphic novel series launched in October 2018 with the story of Sgt. Alvin York, followed by comics focusing on Roy Benavidez, Audie Murphy, and Sal Giunta. In addition to Inouye, the newest volume will highlight World War I hero and Harlmen Hellfighter, Henry Johnson; Tibor Rubin, a Holocaust survivor who later fought in Korea; as well as Dr. Mary Walker, a Civil War surgeon and the only woman to receive the Medal of Honor.

RELATED: Legendary Green Beret Roy Benavidez is the star of a graphic novel about his Vietnam heroics​

The entire series can be read on the Association of the United States Army's website for free, and Medal of Honor: Daniel Inouye can be read in its entirety below: