The nation's highest award for valor is getting the “Wham,” “Bam,” and “Kapow” treatment. The Association of the United States... 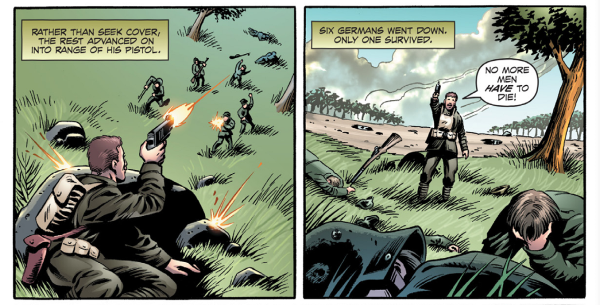 The nation's highest award for valor is getting the “Wham,” “Bam,” and “Kapow” treatment.

The Association of the United States Army is teaming up with professional comic book writers and creators whose work spans the DC and Marvel universes to launch Medal of Honor, a new graphic novel series focusing on those soldiers who have been awarded for battlefield bravery.

“We’re going to go through time and do different battles, so you'll see World War II, Vietnam, and some from Afghanistan, among others,” Joseph Craig, the director of AUSA’s book program, told Task & Purpose. “We want to show the scope of heroism and bravery across the decades in the US Army.”

The first installment was published online on Oct. 10 and follows the exploits of Sgt. Alvin York during World War I, just days after the 100-year anniversary of the events that earned York his enduring fame.

On Oct. 8, 1918, while serving on the Western Front during the Meuse-Argonne campaign, then a corporal, York led a charge against a German machine-gun position. The ensuing battle resulted in as many as 20 enemy casualties attributed to York alone, and the capture of 132 German soldiers.

And he did it with just seven men, or so the story goes, though it hasn't gone uncontested — over the years, reports have challenged the official version of events.

The AUSA comic sticks with the official narrative and is supported by York's account of what happened: That York, along with a handful of men, took over a German position, killed scores, captured the rest, then on their way back to friendly lines rounded out their party of prisoners with even more bewildered Germans.

The non-profit, which is sharing the series for free online, was inspired after the Naval Institute launched a similar effort, Craig told Task & Purpose.

The move shouldn't be all that surprising — comics have provided generations of readers with stories of daring heroes, and occasionally service members have assumed the leading role on those glossy pages —from those in spangly outfits to black tees with a skull logo, among others.

New issues for AUSA’s series will come out quarterly starting in 2019, though at this time it’s unclear which of the Army’s Medal of Honor recipients will have their stories of hardship, heroism and sacrifice illustrated and inked in glossy panels.

SEE ALSO: The Story Of Sgt. York, The Man Who Killed Or Captured More Than 100 Germans In A Single WWI Battle