Master Sgt. Roy Benavidez has long been a legend in the Special Forces community and now you can read about the Medal of Honor recipient's bravery in a new graphic novel published by the Association of the U.S. Army. 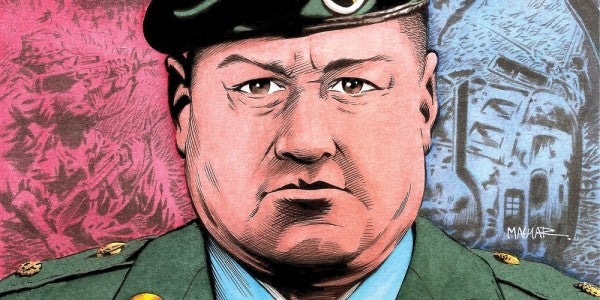 Master Sgt. Roy Benavidez has long been a legend in the Special Forces community and now you can read about the Medal of Honor recipient's bravery in a new graphic novel published by the Association of the U.S. Army.

Benavidez is the subject of AUSA's second Medal of Honor graphic novel. The first was about Sgt. Alvin York and it came out last year.

His story is almost too incredible to believe. Wounded by a land mine in 1965 during his first tour in Vietnam, Benavidez was initially told he'd never walk again. But the tough soldier proved the doctors wrong, requalified for airborne and went on to join Special Forces.

On May 2, 1968 Benavidez hopped onto a helicopter to rescue a 12-man Special Forces team that was pinned down on the Vietnam-Cambodia border. Before he even reached the stricken team, he was wounded in the right leg, face, and head.

He dragged half of the wounded team members onto a helicopter but he was wounded in the abdomen and back just as the helicopter crashed with all onboard.

Benavidez pulled the wounded troops out of the crashed helicopter; called in airstrikes to keep the oncoming enemy at bay; killed an enemy soldier with his knife after being bayoneted him in each arm; and he personally rescued eight troops.

By the time he got back to base, he had lost so much blood from his bullet, shrapnel, and bayonet wounds that he could not move. His comrades assumed he was dead and began zipping him up in a body bag. With his last ounce of strength, Benavidez spat to prove he was still alive.

“The amount of determination that this guy showed in his life was just really awe inspiring and it was a story to share with everyone,” said Joseph Craig, of AUSA.

Craig hired the creative team for the Benavidez graphic novel and made sure the script and artwork were historically accurate. Both Medal of Honor graphic novels are online and AUSA plans to issue a printed compendium after the fourth book.

What Craig found so inspiring about Benavidez's story is that his courage was extraordinary but not superhuman.

“He's not a superhero,” Craig said. “He's a human being. He showed determination and never quit. This is a guy who just never took no for an answer and just kept fighting in every moment.”

SEE ALSO: It's official: David Bellavia to be the first living Iraq War veteran to receive the Medal of Honor