This summer, Pfc. Andrew Cashe will graduate infantry training at Fort Benning, Georgia, and follow in the footsteps of his father, Sgt. 1st Class Alwyn Cashe. 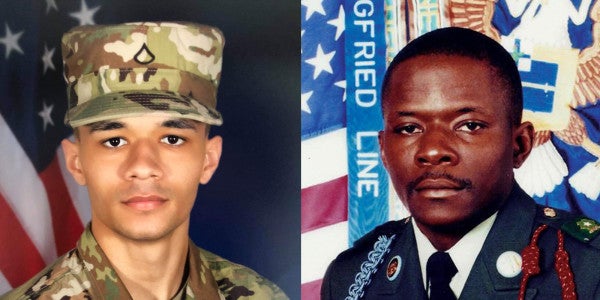 On Oct. 17, 2005 during a route clearance operation in Iraq, Sgt. 1st Class Alwyn Cashe did the unthinkable: Amid an ambush, and drenched in fuel, Cashe walked through fire for his men. Not once, but three times.

His heroism and selflessness ensured his soldiers made it out of the burning wreckage of their Bradley Fighting Vehicle alive, at the cost of his own life.

Years later, his legacy of courage, sacrifice, and steadfast loyalty to his men endures: It’s there in a campaign to see his posthumous Silver Star upgraded to the Medal of Honor, the nation’s highest award for battlefield bravery; it persists in the memories of his family and the stories told by those he served alongside; and is carried on by his son.

Of his decision to enlist, Andrew Cashe said that while it was met with some concern from his family, they accepted that it was something he had to do.

“Well, seeing as I already graduated from college, my biggest motivation is, first and foremost, becoming a man in that sense, and just bettering my life,” he said in a statement provided by Army officials to Task & Purpose.

“My mom was actually my biggest supporter,” Andrew Cashe continued. “Obviously some family members were saddened, or scared, by that decision, but they understand.”

When asked if he felt like he was following in his father’s footsteps, he replied that, “in a sense, yes, but mainly I’m just doing this for me. I guess, that’s going to come with it, joining the Army, but I’m just seeing where it takes me personally and going with the flow.”

Still, for his family, it’s hard not to see a connection between his chosen path, and his father’s service.

“When we were discussing his decision to join, he had told me that he would only consider the Army and would only enlist [in the infantry] stating, ‘It has to be poetic, mom,’” his mother, Andrea Christian, told Task & Purpose. “I knew that he was on the right path to becoming the man I knew he was destined to be.”

“Though he was only eight when his father passed, he is his father’s son,” Christian added.

“You know, because Al, his dad, died when Andrew was so young, all he has are stories that his mom and we have told him,” Alwyn Cashe’s sister, Kasinal Cashe White, told Task & Purpose. “So I was kind of touched that he thought enough of his dad, even in his absence, that he would want to pursue a similar career to his, because my brother means the world to me. It moved me.”

Now 16 weeks into training, Andrew Cashe says that the hardest part so far has been “the mental aspect, with everything that’s going on in the world right now, not really knowing and or understanding those things.”

As for the easiest part?

“For me personally, the physical things,” said Andrew Cashe, who used to captain New Hampshire Technical Institute’s basketball team before graduating in 2019 with associates degrees in sports management and general studies. “The PT, and expectations have been pretty easy, per se, and just building relationships here with my fellow comrades.”

The news that Andrew Cashe had enlisted in the Army as an infantryman was shared by Christian on the SFC Alwyn C. Cashe Deserves the Medal of Honor Facebook group earlier this month.

RELATED: It’s 2020 and SFC Alwyn Cashe still hasn’t been awarded the Medal of Honor. Why?

The fight to see Sgt. 1st Class Cashe awarded the Medal of Honor has continued for years, and has gained traction in the media, within the military and veterans’ community, and among members of Congress. In spite of these efforts, Cashe’s award remains unchanged, even as his son continues his legacy of service.

“The Army does not discuss specific award recommendations until a final decision is made,” Lt. Col. Manny Ortiz, an Army spokesman, told Task & Purpose.

Cashe’s own battalion commander, then-Col. Gary Brito, who originally submitted his Silver Star nomination, has been an outspoken champion for the campaign to see the award upgraded to the Medal of Honor, telling the Los Angeles Times in 2011 that “the criteria of bravery and gallantry under horrible conditions has been met,” in Cashe’s case.

“You don’t often find truly selfless sacrifice where someone put his soldiers’ welfare before his own,” Brito told the Times. “Sgt. Cashe was horribly wounded and continued to fight to save his men.”

When an improvised explosive device detonated under Cashe’s Bradley during that ambush in Iraq 15 years ago, the fuel cells ruptured, drenching Cashe, and consuming the vehicle in flames.

After Cashe was thrown from his position in the vehicle’s turret during the blast, he made his way to the driver, who was on fire, and moved him to safety after extinguishing the flames.

Knowing that the next several minutes were critical, Cashe returned to the Bradley, where six of his soldiers and the unit’s interpreter remained trapped inside. After one of the soldiers managed to lower the exit ramp, Cashe entered the burning troop transport as enemy small-arms fire raked their position.

Three times Cashe walked into the still-burning Bradley as flames licked at his fuel-soaked uniform.

By the time every last one of his men had been freed from the wreck, second and third degree burns covered more than 72% of Cashe’s body. Despite being the most severely wounded member of his team, Cashe insisted that he be the last one loaded onto the medevac.

As Task & Purpose previously reported, when Cashe arrived at the U.S. Air Force hospital at Balad Air Base in Iraq, what remained of his uniform was melted to his skin, yet he was still conscious, and never stopped asking about his men, four of whom ultimately died.

“He just kept saying, ‘I’m good, I’m good, take care of my guys,'” Alisha Turner, a former Air Force medic who was part of the team that treated Cashe, told Task & Purpose in 2018. “He wanted us to focus on everyone else. It was as if they were his children.”

On Nov. 8, he succumbed to his wounds at the Brooke Army Medical Center in San Antonio, Texas.

It’s through these anecdotes, shared by his brothers and sisters in arms, that Alwyn Cashe’s legacy, as a soldier and a leader endure, White told Task & Purpose.

“You know, I always felt that the Army is a special group of people,” White said. “You build bonds that last forever, but over the last 15 years, I’ve felt so many bonds, so many women and men that served with him, and to think that 15 years later, your kid that didn’t know you well, can know you through some of the people that you served with, that you supervised, and they speak so highly of you?”

“How much prouder can you be?”