"The only advice I think I gave him was to do the very best that he could and then to do a little more." 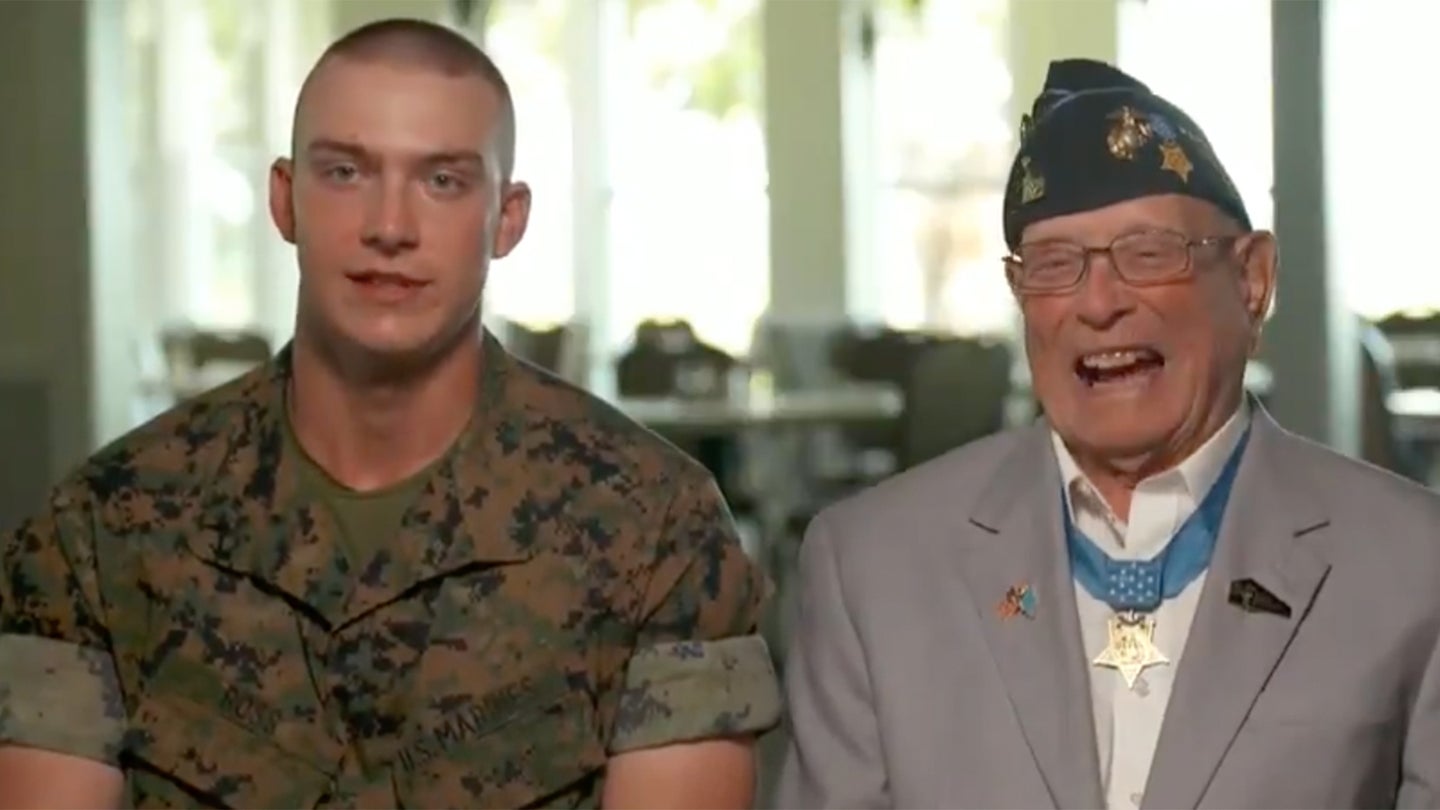 Cedar Ross was halfway through boot camp at Marine Corps Recruit Depot, Parris Island when his drill instructors realized he was the descendant of a living Marine Corps legend. Ross’ great-grandfather, Hershel “Woody” Williams, was awarded the Medal of Honor for repeatedly assaulting Japanese positions during the battle of Iwo Jima in February 1945.

Armed with a flamethrower and demolition charges, Williams attacked a series of pillboxes, fighting the enemy at close range when they charged him with bayonets. 76 years later, Williams has a  Navy ship and a Veterans Affairs center named after him, a foundation for erecting monuments to honor fallen service members, and a lifetime of helping military families.

It’s quite a reputation to live up to, but Ross is prepared for the burden. “The chief drill instructor told me, ‘Ross, you’re going to have big shoes to fill,'” the young Marine told CBS News. “I said, ‘Yes, sir. Thankfully, I wear size 15.'”

Ross graduated from boot camp last week after completing the grueling 13-week journey that turns everyday men and women into U.S. Marines. Ross had some words of wisdom from his great-grandfather to get him through it.

“The only advice I think I gave him was to do the very best that he could and then to do a little more,” said Williams, who, at 97 years old is the last living World War II Medal of Honor recipient, but still showed up to Parris Island see his great-grandson graduate.

Ross is the latest of many who have followed the footsteps of their older, highly-decorated relatives into the military. Last July, Pfc. Andrew Cashe graduated the Army’s 22-week infantry training course at Fort Benning, Georgia, nearly 15 years after his father, Sgt. 1st Class Alwyn Cashe, died walking through the fire of his burning Bradley Fighting Vehicle to help get his men out during an ambush in Iraq. Cashe was awarded a posthumous Silver Star, and there is a campaign to upgrade that award to the Medal of Honor.

There are also military dynasties like that of the late Arizona Senator John McCain, who came from a long line of Navy officers and who accumulated his own legendary service record and survived six years as a prisoner of war in North Vietnam. McCain’s son Doug was a Navy pilot, his son Jack flies helicopters in the Navy Reserve, and his son James served with the Marines in Iraq.

Ross’ graduation ceremony last week was also a major occasion for the families of the 350 other young Marines who graduated with Ross, as it was the first time since the COVID-19 pandemic began last year that all family members were allowed to attend boot camp graduation. “They have said, ‘By taking that oath that you can take my life but you cannot take my country or my freedom,'” Williams said.

Related: What it was like fighting on Iwo Jima, according to a Marine Medal of Honor recipient