‘When Your Brother’s Down, You Go To Your Brother’ — Fatally Shot, This Marine Rendered Aid To Fellow Officer For As Long As He Could

On Dec. 7, two years after a domestic disturbance call took a tragic turn and claimed the lives of two... 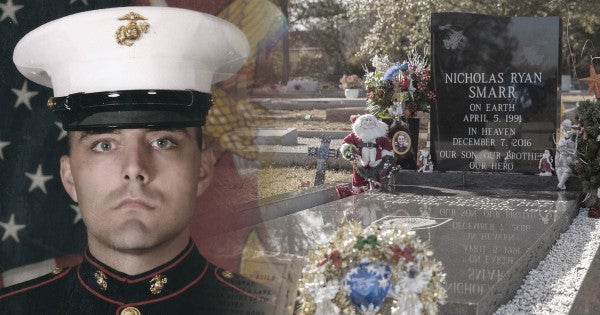 On Dec. 7, two years after a domestic disturbance call took a tragic turn and claimed the lives of two Americus, Georgia police officers, the Marine Corps honored one of their own: Lance Cpl. Nicholas Smarr, who died while rendering first aid to another fatally wounded officer.

A Marine reservist, Smarr was responding to a domestic disturbance call on the morning of Dec. 7, 2016 near Georgia Southwestern State University, according to the Washington Post. Alongside Smarr was his longtime friend and fellow police officer Jody Smith, who was nearby and decided to back up Smarr after hearing him over the radio.

After the two officers arrived at the apartment, Smith went around the back and Smarr entered through the slightly ajar front door. Smarr's body camera footage shows the officer enter the residence and catch sight of a man at the end of the hall, who then runs out the back door. In the video, Smarr sprints after the suspect, who suddenly turns and opens fire.

During the pursuit, both Smarr and Smith were shot in the head.

Though grievously wounded, Smarr drew his weapon and returned fire. Then without a second thought, he went to Smith and began administering first aid and continued to do so until he couldn’t any longer. When backup arrived, they found the two friends on the ground, Smarr was dying, his body slumped over Smith, who succumbed to his wounds the following day.

The suspected shooter was identified as 32-year-old Minquell Kennedy Lembrick, who committed suicide on Dec. 8 after barricading himself inside a home as local police closed in.

It was the body camera footage that made Mark Scott, the Americus Police Chief, realize the full scope of Smarr’s sacrifice and courage that day.

“Watching the body camera video of this incident is one of the hardest things I have ever had to do in my career,” Scott wrote in a Sept. 15, 2017 letter to Marine Gen. Robert Neller, the Commandant of the Marine Corps, which was provided to Task & Purpose by Marine Corps Forces Reserve.

“Every time that Nicholas Smarr performed a chest compression on Jody Smith, blood poured from his own wound,” Scott continued. “Nick knew what he was doing and he had to know that the exertion was causing him to bleed out faster. He never stopped. He kept up talking to his comrade until his speech became garbled and he finally collapsed across Jody's chest.

In 1991, I myself was shot through the gut attempting to arrest a felony suspect. Although I was able to continue the fight for a short time until the suspect was down, I honestly don't know that I would have been able to do what Nick did for Jody, knowing that my efforts were costing me my own life. Nick Smarr was everything that a police officer is supposed to be and more. He was a fiercely loyal friend, a loving son and brother, a kind and compassionate man, an honest, fair, ethical, hardworking police officer, and a proud United States Marine. He was a hero to this department and to this community in life and a hero to the nation in his selfless death.”

On Dec. 7, 2018, Smarr was posthumously honored for that sacrifice when his mother, Janice Smarr, was presented the Navy and Marine Corps Medal for his actions that day. The ceremony, as well as insights into Smarr’s character and courage were commemorated in a memorial video produced by Marine Sgt. Andy Martinez and Cpl. Niles Lee.

“Why would a man put someone else's life in front of their own life? That's what Marines do. That's what police officers do. That was his calling,” Scott says in the video. “When your brother's down, you go to your brother. He had no concern, really, for what was happening to him. His entire focus was on trying to save Jody. He worked on Jody until he couldn't continue any further.”

While tragic, Smarr's final moments were selfless, heroic, and in keeping with a tradition set by countless others before him.

“To be honest what officer Smarr did, rendering first aid to a fallen comrade while himself expiring is somewhat unique in the modern law enforcement field, but it is not unique to a United States Marine,” Maj. Richard McCorkle of the Americus Police Department wrote in another September 2017 letter to the Commandant of the Marine Corps, which was also provided to Task & Purpose alongside Scott's letter.

“This selfless act has been performed by Marines throughout history from the battle of Belleau Wood, Iwo Jima, Chosen Reservoir, Peleliu, Khe Sanh and Fallujah,” McCorkle continued. “This simple act has been documented for the entire country to see. Officer Smarr has become famous in death, and justly so. But yet officer Smarr was one of the simplest men I commanded. He was greatly simple. He was simply great. His was the simplicity of the saints, seers and heroes of the ages, the simplicity of true worth, of true dignity, of true honor.”

For heroism while serving as a police officer with the Americus, Georgia Police Department on 7 December 2016. After being dispatched to a domestic disturbance call Lance Corporal Smarr and his best friend Officer Jody Smith gave chase to a known criminal suspect. Both officers were shot in the head during an ensuing ambush. Although mortally wounded, body camera footage shows that Lance Corporal Smarr crawled to Officer Smith and administered first aid until he could no longer do so. With a severed artery on the left side of his neck, and as he was bleeding profusely, he refused to administer what could have been his own life saving treatment. Instead, he selflessly performed chest compressions and gave mouth to mouth breathing until he finally succumbed to his wounds. Although Officer Smith too eventually died, Lance Corporal Smarr's actions have been credited with keeping him alive long enough for his organs to be donated. By his courageous and selfless actions in the face of great personal risk, Lance Corporal Smarr reflected great credit upon himself and upheld the highest traditions of the Marine Corps and the United States Naval Service.