The chain of events that culminated in a security forces airman firing his M4 carbine five times at a locked... 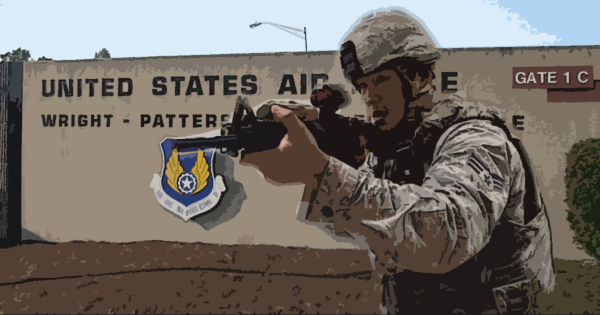 The chain of events that culminated in a security forces airman firing his M4 carbine five times at a locked door on Wright Patterson Air Force Base, Ohio, all began when an injured jogger was taken to the base emergency room, a command-directed investigation into the incident found.

On Aug. 2, the 88th Air Base Wing held an active shooter exercise, but unbeknownst to them, the 88th Medical Group was holding a separate mass casualty drill, which included treating airmen with simulated wounds, according to an executive summary of the investigation, which was provided to reporters on Wednesday.

When the jogger, who was screaming and crying from the injuries, arrived at the ER at the same time as role-players from the mass casualty drill, a confused caller told the base operator that an active shooter was on the loose and the hospital locked down, the investigation says. That prompted someone else to call 911.

Things became even more confused when the security forces airman deciding to take the initiative and breach the locked door his M4, causing more people to dial 911, according to the investigation.

“Despite the IC’s attempt to explain the situation and otherwise stop them, approximately 50 area mutual responders bypassed the IC, breached the locked front door of the hospital and entered with weapons drawn,” the investigation says.

Col. Thomas Sherman, 88th Air Base Wing commander, said the misunderstanding that day stemmed from “a convergence of multiple events that were taking place at the exact same time.”

The jogger injury was a “real world event” that coincided with the medical group’s mass casualty exercise, in which the role-players looked like mass shooting victims, Sherman said. Meanwhile, the active-shooter shooter drill was taking place about a mile away at the Kittyhawk Chapel.

“So the calls over the ‘giant voice;’ the radio calls; things along those lines were all taking place at the same time,” Sherman explained. “Somewhere in this convergence of discussions from the real world to patients arriving to an exercise that was taking place at the Kittyhawk, there became a belief – and a sincere belief – that this was actually an active-shooter event. That began the cascading effect of 911 calls and reporting that was taking place throughout this.”

Sherman had little to say about the security forces airmen who fired his M4 other than he successfully breached the door.

One airman was injured by “some metal particulate that came after the round was fired,” said Sherman, who did not elaborate further.

Sherman also refused to say if any people were behind the locked door when the airman opened fire. He referred questions about the shooting to the Air Force Office of Special Investigations.

Col. Thomas Sherman, 88th Air Base Wing commander, said the misunderstanding that day stemmed from “a convergence of multiple events that were taking place at the exact same time.”

“We need to respect the lines of investigation, as I’m sure you can appreciate,” Sherman explained. “We specifically asked AFOSI to do a very independent look on this and they will be happy to be able to answer some of the questions that you’ve got.”

OSI spokeswoman Linda Card told Task & Purpose that the investigation into the shooting incident could only be released through a Freedom of Information Act request.

Separately, the command directed investigation determined that firing at the door five times was “inappropriate” given the circumstances.

“All personnel must adhere to weapons safety training at all times — especially during high-pressure situations,” the investigation says.

Despite the SNAFU, Sherman said that Wright Patterson security forces airmen know when and how to use small arms.

The 88th Security Forces Squadron commander will decide whether to take any disciplinary action against the airman who fired at the door, Sherman said.

“To prevent any undue command influence, it is not appropriate for me to speculate on that,” he said.