McChrystal: Trump Is ‘Immoral’ And I’d Never Work For Him 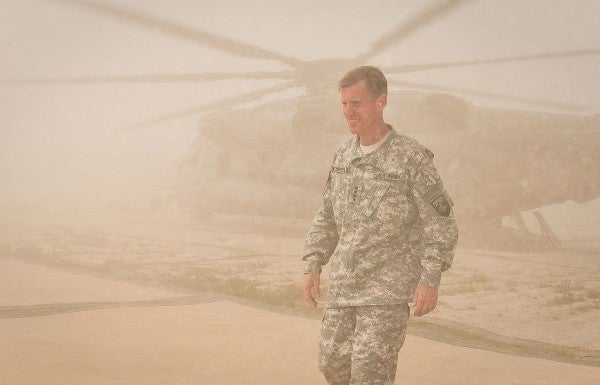 Retired Army Gen. Stan McChrystal sharply criticized President Donald Trump in an interview with ABC News on Sunday, going so far as to say Trump is “immoral” and someone he'd refuse to work for.

“If we want to be governed by someone we wouldn't do a business deal with because their — their background is so shady, if we're willing to do that, then that's in conflict with who I think we are,” McChrystal told ABC News' Martha Raddatz.

“And so I think it's necessary at those times to take a stand.”

McChrystal served 34 years in the U.S. Army. His last assignment was as the commander of the International Security Assistance Force in Afghanistan from June 2009 to June 2010. The following year, he resigned from his ISAF post soon after an article published in Rolling Stone revealed that he and his aides had disparaged senior members of the Obama administration.

The retired general also criticized Trump's decision to pull out of Syria and draw down U.S. forces in Afghanistan amid peace negotiations.

“I think the great mistake in the president's leaked guidance is that just when we were starting to sit down with the Taliban, just we were starting to begin negotiations, he basically traded away the biggest leverage point we have,” McChrystal said.

It's worth noting that in November, McChrystal told Secretary of State Mike Pompeo his “best suggestion” was to “keep a limited number of forces” in Afghanistan and “just kind of muddle along,” as Task & Purpose previously reported.

The inevitable presidential response tweet has not yet been issued.