McChrystal: Trump Needs To Take Responsibility For The War In Afghanistan

The Pentagon will send an additional 4,000 troops to Afghanistan as early as next week, U.S. officials confirmed June 15... 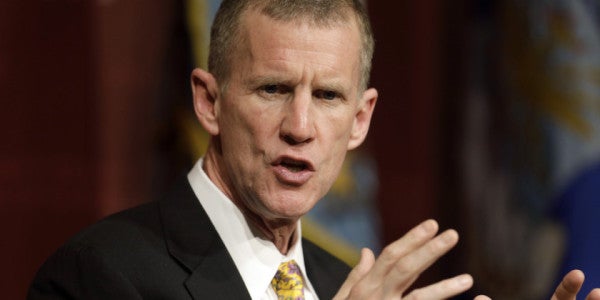 The Pentagon will send an additional 4,000 troops to Afghanistan as early as next week, U.S. officials confirmed June 15 — just one day after President Donald Trump delegated his authority to determine downrange troop levels to Secretary of Defense James Mattis.

Hours before the troop increase was announced, retired Army general Stanley McChrystal told CNN that Mattis’ management of troop levels wouldn’t relieve the commander-in-chief of his accountability for the war’s conduct.

McChrystal: Trump will own Mattis decision on Afghanistan https://t.co/wkyIMYLRb5#TheLead

“I believe Jim Mattis will make a great decision on Afghanistan,” McChrystal told anchor Jake Tapper. “But I don't think that takes away President Trump's responsibility for that decision.”

On June 14, Mattis gave a dire assessment of the war when he spoke at a Senate Armed Services Committee hearing. “We are not winning in Afghanistan right now,” he told the senators, “and we will correct this as soon as possible.”

Related: Mattis To Send Nearly 4,000 US Troops To Afghanistan ‘As Early As Next Week’ »

The decision to increase America’s military commitment in Afghanistan comes at a tenuous point in the 16-year long war, with the Islamic State and a resurgent Taliban surging across the country, three years after NATO combat missions officially ended.

McChrystal, who served under President Barack Obama as the top commander in Afghanistan from 2009 to 2010, before he was forced to step down following a Rolling Stones exposé in 2010, was enthusiastic but cautious about the U.S.’s prospects for future mission success.

“President Trump will ultimately own the outcome, and I think it’s important that we take the long view,” McChrystal said. “Well, we’ve been there for 15 years, and I'm a believer in the Afghan people, so I support an increase in forces there.”

The additional 4,000 troops will bring the total force count to roughly 14,000 — 8,200 under the Obama-era troop cap, plus an additional 2,000 that have deployed there in recent years.

“But the question we have to ask is if that increase doesn’t produce the outcome we want, what’s our commitment after that, and are we prepared to make a long-term commitment to the people of Afghanistan?” McChrystal said. “I personally think we should, but I don’t that that’s a decision for me to make. I think that’s a conversation that we as the American people have got to have in a very realistic way.”

The newly proposed deployment levels are on par with U.S. troop strength in Afghanistan from 2001 to 2004, but faced with a resurgent Taliban and a growing ISIS presence, that may not be enough to shift the tide — and securing the country, again, shouldn’t be the sole responsibility of American troops on the ground, again, McChrystal argued.

“I think there's going to have to be an adequate ground force, but I don't think it should be primarily American,” McChrystal said. “That is a regional issue to which regional forces are most appropriate.”