‘We Aren’t Winning’: Trump Is Clashing With The Generals Over His Afghanistan Strategy, Report Says

During a tense July 18 meeting in the White House, the commander-in-chief lambasted Secretary of Defense James Mattis and Chairman... 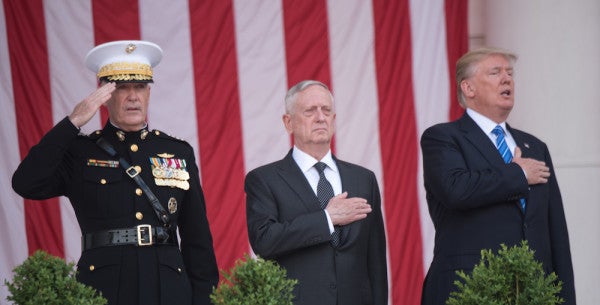 During a tense July 18 meeting in the White House, the commander-in-chief lambasted Secretary of Defense James Mattis and Chairman of the Joint Chiefs of Staff Gen. Joseph Dunford over the Pentagon’s approach to the 16-year-old U.S. campaign, several anonymous administration officials told NBC News in an Aug. 2 report.

Most significantly, Trump “suggested” that Mattis and Dunford replace Gen. John Nicholson as commander of U.S. forces in Afghanistan, most likely with current national security adviser Lt. Gen. HR McMaster, who was also present at the meeting, according to Axios. Nicholson, who had spent more time in Afghanistan (four tours) than any of his predecessors at the time of his nomination for the Pentagon’s top command role there, had requested “a few thousand” more U.S. troops to beat back the Taliban during his February testimony before the Senate Armed Services Committee

After the president vested Mattis with “full authority” over determining troop levels in Afghanistan in June, the secretary of defense had promised a finalized strategy for turning around the U.S. campaign there by mid-July. On July 21, two days after the Situation Room confab described by NBC News, Mattis told the Associated Press that the administration was still working on the “big ideas” regarding the U.S. government’s long-term approach to stabilizing and rebuilding the country.

Related: Mattis Has Officially Been Given Full Control Of The War In Afghanistan »

Accompanying Mattis, Dunford, and McMaster at the July 19 meeting were a coterie of Trump loyalists, including White House advisers Steve Bannon and Jared Kushner, Secretary of State Rex Tillerson, and Vice President Mike Pence. But apparently, the “big ideas” that most resonated with Trump during the meeting were inspired by a recent meeting with Afghan War veterans.

“Trump vented to his national security team that the veterans told him forces from the North Atlantic Treaty Organization have not been helpful, and he lamented that China is making money off of Afghanistan's estimated $1 trillion in rare minerals while American troops are fighting the war,” an administration official told NBC News. “Trump expressed frustration that his advisers tasked with figuring out how the U.S. can help American businesses get rights to those minerals were moving too slowly.”

Mattis, who mounted a vocal defense of Nicholson, left the meeting “visibly upset,” according to the report. “Mattis often takes a walk when grappling with an issue,” one official told NBC News. “That afternoon, the walk took longer than usual.” (We can only wonder how many innocent bystanders died during Chaos’ evening stroll.)

Presidents have always clashed with their generals. Union Army Gen. George McClellan famously distrusted Abraham Lincoln and even challenged him for the role of commander-in-chief in the 1864 presidential election; more recently, Gen. Stanley McChrystal’s clashes with Barack Obama led to his eventual ouster from his role in command of the Pentagon’s Afghan War effort.

But Trump’s clash comes amid a particularly unusual transformation within the presidency. At the end of July, the president suddenly replaced chief of staff Reince Priebus with retired Marine Gen. John Kelly, the fourth general to ascend to highest levels of Trump’s executive branch alongside Mattis, Dunford and McMaster (Randolph Alles, a Marine Corps major general, became head of the Secret Service in April). Since his appointment, Kelly has reportedly cracked down on the more quixotic players in the West Wing — axing profane comms director Anthony Scaramucci, limiting access by problematic White House advisers like Kushner, and even reassuring Attorney General Jeff Sessions of his job stability, despite weeks of sniping from Trump.

Simultaneously, McMaster is in the middle of a total purge of Trump loyalists and Bannon-style ideologues from the National Security Council; they include Ezra Cohen-Watnick, who leaked information to the House Intelligence Committee on the Russia investigation; Iran hawk and retired Army Col. Derek Harvey, a Michael Flynn holdover; and Rich Higgins, author of a batshit memo on a supposed conspiracy by “globalists, bankers” — read: Jews — “the ‘deep state,’ and Islamists” to undermine the presidency from the outside and within. On Aug. 3, the Washington Free Beacon reported that McMaster was far from finished with his ousters of the more unpredictable and inexperienced elements in the White House’s national security structure.

Following the appointment of Kelly, the Associated Press reported that the new chief of staff and Mattis had, in the early weeks of the Trump administration, made a secret pact “that one of them should remain in the United States at all times to keep tabs on the orders rapidly emerging from the White House,” effectively babysitting a West Wing embroiled in what seems like perpetual chaos by advisers and sycophants with no military or government experience. Now, in the context of Trump’s tense July 19 showdown with his generals in the Situation Room, it’s unclear whether a troika of Marine generals and a lone soldier will be able to impose good order and discipline on the White House.