President Donald Trump made headlines last month when he promised Secretary of Defense James Mattis and his generals would be... 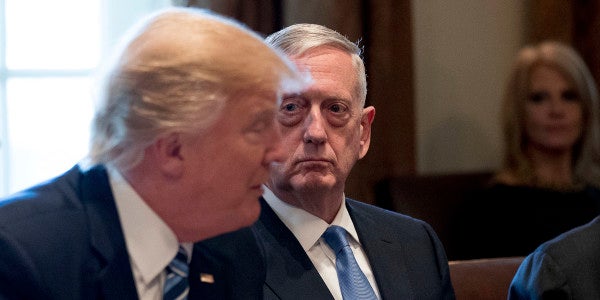 President Donald Trump made headlines last month when he promised Secretary of Defense James Mattis and his generals would be given “full control” to deploy additional U.S. troops to Afghanistan as they saw fit. But today, the Wall Street Journal revealed that Trump’s promise wasn’t as advertised: The White House privately told defense planners they’d better not deploy more than 3,900 new service members.

That’s according to an internal memorandum circulated by the White House just days after the Trump administration garnered plaudits from media commentators for “letting the generals decide” how to proceed in Afghanistan, the Journal reports:

The memo, sent to a small group of administration officials from national security adviser Lt. Gen. H.R. McMaster, said that the president would let Defense Secretary Jim Mattis send no more than 3,900 troops to Afghanistan without coming back to confer with the White House, according to people familiar with the document.

Around the same time that memo was circulated, an anonymous “Trump administration official” told the Associated Press that Mattis was sending “almost 4,000 additional American forces to Afghanistan.” The Pentagon swiftly pushed back against that report, saying that Mattis had “made no decision on a troop increase in Afghanistan.”

The McMaster memo limiting troop increases “came as a surprise to some administration officials who were under the impression that the White House would impose no such restrictions,” the Journal reports. Indeed, Trump campaigned heavily on the promise that his administration wouldn’t micromanage troop levels in the war zones in Iraq, Syria, and Afghanistan, as President Barack Obama was often accused of doing.

“What I do is I authorize my military,” Trump said in an April press conference. “We have the greatest military in the world, and they’ve done the job, as usual. We have given them total authorization, and that’s what they’re doing.”

But the memo unearthed by the Journal suggests that Trump, like Obama, is continuing to impose “force management levels” — caps on deployment numbers — on his commanders from above, even as he’s claimed “a tremendous difference” between his generals’ freedom to wage war and their freedom under Obama.

Pentagon spokeswoman Dana White downplayed the memo’s significance in a response to the Journal. “A number doesn’t really tell you anything,” she said. “It requires a greater context, and if you are sending sons and daughters to Afghanistan, you owe it to them to lay out what’s the way forward, not just a number.”

So far, the White House has yet to fully articulate that way forward — a deficiency that even military hawks in Trump’s party are unhappy about.

“We’re now six months into this administration. We still haven’t got a strategy for Afghanistan,” Republican Sen. John McCain of Arizona, chairman of the Senate Armed Services Committee, told Mattis in a Senate hearing last month, adding: “It makes it hard for us to support you when we don’t have a strategy.”