Lindsey Graham Damn Well Knew We Were In Niger. Here’s Why That Matters

Among the rising chorus of voices calling for a broad examination of America’s Global War on Terror in the wake... 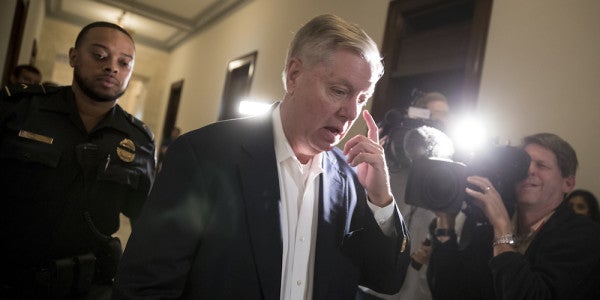 Among the rising chorus of voices calling for a broad examination of America’s Global War on Terror in the wake of the deadly Oct. 4 ambush in Niger that killed four U.S. soldiers, the voice of Sen. Lindsey Graham has stood out. He hasn’t targeted President Donald Trump as aggressively as his colleagues John McCain and Bob Corker over the incident, but the senior South Carolina Republican and Senate Armed Services Committee member’s been frank in complaining about a lack of transparency surrounding the Department of Defense’s security posture in Niger, one of 53 countries where U.S. Africa Command currently oversees some 6,000 troops deployed American.

“I didn’t know there were a thousand troops in Niger,” said Graham during an Oct. 22 interview with NBC News’s Chuck Todd, pointing to the ambiguity surrounding the U.S. counterterrorism mission there as a reason for renewed debate over the post-9/11 congressional Authorization for the Use of Military Force. “John McCain is right to tell the military because this is an endless war without boundaries, no limitation on time or geography, you gotta tell us more. And he’s right to say that.”

The comment paints an alarming portrait of America’s forever wars. As the Pentagon deploys fresh combat troops to Afghanistan and Secretary of Defense James Mattis promises expanding counterterrorism operations in Africa, voters are confronting the prospect of an invisible, infinite war, the contours of which they may never fully grasp. If Graham, a member of the Senate Armed Services Committee who spent 33 years in uniform and is highly focused on national security matters, didn’t know we were in Niger, then how does the average taxpayer expect to find out?

Well, Graham had to know: He was present during U.S. Africa Command chief Gen. Thomas Waldhauser’s March testimony on AFRICOM’s 2017 force posture. In that testimony, Waldhauser not only explicitly discussed counterterrorism operations in Niger, but also warned lawmakers that only “20-30%” of the command’s intelligence, surveillance, and reconnaissance requirements have been met.

This claim is also dubious: The counterterrorism mission in Niger may be a quiet front in the Global War on Terror, but it was far from silent. And the Senate has always been well-informed on how many troops the U.S. had there.

As I’ve previously reported, Pentagon-led terror operations in West and Central Africa began in earnest under President George. W Bush. But things ramped up in 2013, after President Barack Obama informed Congress that the Pentagon would deploy 40 troops to Niger to set up a drone base and assist French forces in gathering intel on al Qaeda-affiliated militants in neighboring Mali.

Since then, the White House has authored regular letters to congressional leaders detailing the operational status of military forces in Niger and its neighbors. It’s to fulfill the 1973 War Powers Resolution’s requirement to provide regular updates to lawmakers on ongoing operations. And despite a March decision to stop disclosing troop deployments in certain countries, the Trump White House has delivered those regular Niger updates to Congress.

On June 7, exactly six months after the Obama administration’s last formal letter to Congress on counterterrorism operations, President Donald Trump told the Speaker of the House and the President Pro Tempore of the Senate in a letter that there were 645 U.S. military personnel in Niger “to provide a wide variety of support to African partners conducting counterterrorism operations in the region.”

These reports to Congress are published in the public domain on the White House website and likely circulated across Capitol Hill among the lawmakers and policy wonks who concern themselves with such matters — but when asked by Task & Purpose if Graham had read the June 7 update from the Trump White House, his spokesman did not comment.

Even if Graham didn’t see the June 7th notification — understandable, as he was probably bogged down in the Russia investigation and the GOP’s latest health care push — it’s likely he or his staff would’ve stumbled across another notice in mid-August. The text of the War Powers Resolution requires such reports be referred to the House and Senate Committees on Foreign Relations “for appropriate action”; it’s unlikely they would have remained off the radar of one of the Senate’s most national-security-oriented members and his advisers.

Regardless of what he knew — or should have known — about U.S. ops in Niger, Graham’s harumphing about the creeping edges America’s forever wars doesn’t square with his support of a higher operational tempo after Mattis informed a group of senators amid threats of subpoena from John McCain that hey, guess what, we’re going to be targeting ISIS-related militants like those reportedly behind the Niger ambush for years to come.

And despite his ire with the Trump administration, Graham opposed a new war authorization as “micromanagement” that could be detrimental to U.S. counterterrorism operations in the longer run. “There's going to be an AUMF debate to come out of this because some people are going to say, 'Wait a minute, you can designate anybody you want to designate ?'” he told reporters. “And here's the answer: the Congress is not set up to be military commanders.”

This level of candor from Graham and Mattis regarding future U.S. engagements in Africa may be exactly what the American public needs to help clear up the dangerous confusion surrounding U.S. operations there. A cursory examination of a year’s worth of news headlines shows that the conflicts in Iraq, Afghanistan, and Syria chewed up significantly more attention among the news-consuming public, and it’s certainly likely that Graham makes the same trade-offs with regards to his limited attention that everyone else is.

All the ambiguities surrounding his own knowledge of U.S. Africa operations in the last week don’t make Lindsey Graham wrong, though; they make him human. He’s paying more attention now, and so are we. As Mark Twain wrote in 1869 in The Innocents Abroad: “God created war so that Americans would learn geography.”