3 Months After The Ambush In Niger, Does Trump Even Have An Africa Strategy? 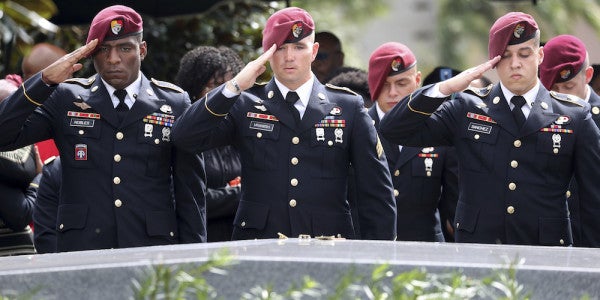 President Donald Trump faced a massive international backlash after allegedly referred to Haiti, El Salvador, and several African nations as “shithole countries” in a Jan. 11 Oval Office meeting. But if you look past the cable news hysterics over the commander-in-chief’s word choice, the White House’s stance on Africa should come as no surprise: In the aftermath of the deadly ambush in Niger last October that left four Army special operations soldier dead, spurring concerns about the U.S.’s widening counterterror ops across the continent, the Trump administration’s stable of Africa experts and advisors is a ghost town.

According to government officials and publicly available data, Trump has made almost no Africa-related appointments at the Departments of Defense and State in the year since he took office. The DoD quietly announced the appointment of Alan Patterson, an old CIA Africa hand, as assistant secretary of defense for African affairs last month — and that’s about it.

“Patterson is the only political appointee for the Africa Affairs office,” a DoD spokesman told to Task & Purpose. That absence of Africa-specific policy and strategic know-how threatens to hinder the Pentagon’s ever-expanding Global War on Terror. (The White House did not immediately respond to requests for comment from Task & Purpose).

Trump has visibly lagged behind his predecessors when it comes to making political appointments. As of Jan. 5, the president had only offered 502 nominations for political positions, down from Barack Obama’s 657 and George W. Bush’s 741; there are currently 245 critical positions unfilled across the executive branch, and most are likely to remain that way. “I'm generally not going to make a lot of the appointments that would normally be — because you don't need them,” Trump told Forbes in an October interview. “I mean, you look at some of these agencies, how massive they are, and it's totally unnecessary. They have hundreds of thousands of people.”

But Trump’s vision of a lighter federal government has left the U.S.’s Africa bench lacking. Those woes aren’t confined to the Pentagon’s E-ring: Of the six principal positions within the State Department’s Bureau of African Affairs, the Trump administration has filled only two — deputy assistant secretary for African affairs Stephanie S. Sullivan and deputy assistant secretary for southern Africa and public diplomacy Todd Haskell. Of the 48 African states (plus the African Union) with whom the U.S. has diplomatic missions, a mere 16 have appointed ambassadors — and of those, only David T. Fischer as ambassador to Morocco is a Trump administration political appointment. (As of Jan. 9, he remains unconfirmed by the Senate.) According to McClatchy, the turnover among high-ranking career and political officials has rankled the diplomatic corps to the point of near mutiny. That’s an especially troubling development for the globe’s largest continent, given the diplomatic corps’ unusually close engagement with U.S. Africa Command since the Pentagon stood up the command in 2007.

So far, the primary agent of U.S. diplomacy to Africa’s 54 countries and 1.2 billion citizens — apart from acting assistant secretary of state for African affairs Donald Yamamoto, a career foreign service holdover — appears to be U.S. ambassador to the United Nations Nikki Haley, whose October visits to Ethiopia, the Democratic Republic of Congo, and South Sudan were described by Reuters as “one of the first tangible signs of interest in Africa” by the Trump administration. (The Department of State acknowledged, but did not respond to, multiple requests for comment from Task & Purpose.)

It’s not as though nobody at DoD cares about Africa. The portfolio of assistant secretary of defense for international security affairs Robert S. Karem includes the African Union, which is very much in the fight against militants across the continent; Andrew F. Knaggs, appointed deputy assistant secretary of defense for special operations and combating terrorism in July 2017, oversees the irregular warfare waged by U.S. special operations forces in theaters like Africa (already the site of a growing SOF presence). Indeed, the DoD’s various country desks for each African nation are continually staffed by a duty officer, usually military or career civilian appointees, who keeps a watchful eye on developments under their area of responsibility.

But Africa isn’t a primary focus for officials like Karem and Knaggs, and the responsibility for balancing their competing interests currently rests on Patterson’s shoulders. “There are several offices within the DoD policy side that frequently overlap,” a DoD spokesman told Task & Purpose, but Patterson “is the primary filter for all policies between the Department of Defense and the continent of Africa.”

Related: T&P;'s Full Coverage Of US Military Involvement In Niger »

Similarly, several principal Africa positions at State are currently occupied by “acting” career officials drawn from within, rather than Trump picks. But the presence of acting staff doesn’t convey a coherent strategy the same that a designated political appointee does, especially when career State and Defense staffers find themselves frozen out of major meetings with heads of state — they maintain a strategy, not devise the strategy. To wit: The desk of acting deputy assistant secretary, East Africa and Sudan & South Sudan — a diplomatic area of responsibility that encompasses terror concerns in Ethiopia and Somalia and critical military assets in Djibouti — remains vacant.

Those vacant positions at State will only exacerbate the regional obstacles faced by the DoD as it ramps up counterterror operations in the aftermath of the Niger raid. “Some of AFRICOM’s challenges may also be posed by personnel gaps in the State Department,” Lauren Ploch, a Congressional Research Service specialist in African affairs, told Task & Purpose. “There are several key ambassadorial positions that remain vacant, including Somalia and South Sudan, and the Department’s OIG reported late last year that overall over one-third of its posts on the continent were unfilled.”

Current U.S. military areas of operations authorized under the 2001 Authorization for the Use of Military Force passed after the September 11th terror attacksDefense Intelligence Agency

State is better staffed for Africa affairs than the Pentagon, reflecting long-standing policy logic regarding the continent — Africa is a diplomatic and humanitarian concern for U.S. officials, rather than a purely military one — but the absence of regional experts at both Foggy Bottom and the Pentagon E-ring is alarming. Whatever the intentions are behind Trump’s impulse to cut down on the number of worker bees filling the halls of the federal bureaucracy, political appointments aren’t careerists — they’re essential to articulating a strategic vision for the continent. Brookings Institution researcher Vanda Felbab-Brown put it best to Al Jazeera in September 2017: “The problem .. that the competent, highly skilled bureaucracy has been made totally dysfunctional by so many positions not being confirmed.”

Yamamoto may have claimed that the Trump administration is “looking at Africa in the future in 2050” during a conference with African Union officials in November, but the empty desks at State and DoD suggest otherwise. Those empty desks will threaten the future of U.S. counterterrorism operations in Africa — and, in turn, the service members deployed to execute them — more than any “shithole” comment.