The four Army Special Forces personnel killed by ISIS militants in Niger last year as part of the Department of... 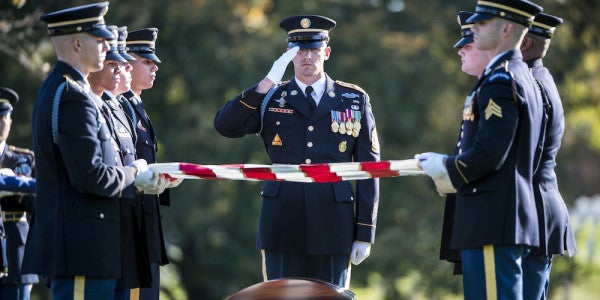 The four Army Special Forces personnel killed by ISIS militants in Niger last year as part of the Department of Defense’s deepening counterterrorism fight across Africa are unlikely to be the last U.S. service members to die in combat there. That is, unless the Pentagon invests heavily in its rapid-response medical and casualty evacuation efforts across the continent — a prospect that seems deeply unlikely.

Appearing before the House Armed Services Committee on March 6, Marine Gen. Thomas Waldhauser, the head of U.S. Africa Command, emphasized that AFRICOM requires a significant boost to both its quick-response (QRF) and intelligence, surveillance, and reconnaissance (ISR) forces. Waldhauser emphasized the decade-old commands ISR deficits in the past — a major sticking point in the aftermath of the ambush that left four 3rd Special Forces group personnel dead — and asked for additional resources, he noted in the AFRICOM’s 2018 posture statement that the command’s current casevac and medevac capabilities are, well, fucking trash.

“We to accommodate a faster response time with regards to the operation that took place in Niger,” Waldhauser said. “When it comes to issues like QRF and medevac, this size is huge for us. [It’s] three and a half times the United States inside the African continent, and then you have small pockets of people distributed in many different places. Our challenge, QRF and medevac-wise, is significant.”

The is a significant problem. Robust ISR and rapid-response capabilities aren’t just essential for avoiding an ambush in the first place (and provide additional air support if needed), but getting wounded service members off the battlefield during the “golden hour,” the critical window for medical treatment to prevent permanent damage following a major injury. Indeed, French aircraft and sole AFRICOM casevac contractor Berry Aviation only appeared to evacuate U.S. military personnel during the Oct. 4 Niger ambush two hours after the attack commenced — far too late to have provided meaningful treatment. And the absence of an effective medevac/casevac infrastructure means that the U.S. service members who go out on a reported average of 10 missions a day throughout continent can’t rely on a rescue should shit go south.

“With personnel recovery and casualty evacuation, contracted search and rescue assets are an expensive but necessary substitute to our limited capacity,” Waldhauser told lawmakers. “Moreover, most African partners neither have the organic assets nor the funding to assist with personnel recovery or casualty evacuation mission.” (When asked for specifics regarding the closest available QRF team at the time of the Niger ambush, Waldhauser dodged and cited the Somali coast.)

Deploying medevac/casevac within that golden hour is a new, old problem for the Pentagon. The U.S. has enjoyed unprecedented air superiority during its campaigns against terror networks in Iraq and Afghanistan, making questions of medevac and casevac somewhat moot despite the threat of an odd RPG clipping a Black Hawk during a dust-off. But military planners are already considering new obstacles as they shift their focus to theaters like North Korea, where Pyongyang's relatively robust air defenses could effectively deny such efforts, or in eastern Europe, where the prospect of dogfighting sophisticated aircraft has driven a DoD reevaluation of short-range air defense systems for the first time since the Cold War.

But for service members operating in AFRICOM’s area of responsibility, the challenge isn’t enemy fire but resource scarcity over the continent’s sprawling political (and physical!) geography. Waldhauser gave the example of the Somali seaboard, a 1,100-mile stretch of land that’s been increasingly subject to aggressive air strikes and renewed troop deployments in the last year.

To be fair, the Army is working overtime to extend that golden hour with theaters like Eastern Africa explicitly in minds. But until the DoD can address the treatment side of casualties, the logistical element may remain the most critical to ensuring lower body counts. Just consider that Berry Aviation, that AFRICOM casevac contractor, only had “one fixed wing aircraft and one helicopter situated in Niamey ready to go within three hours for operations throughout North and West Africa” at the time of the deadly ambush, according to reporting from The War Zone — two hours beyond that essential ‘golden hour.’

While the DoD is in the process of expanding its fleet of HH-60M MEDEVAC Black Hawk helicopters to bolster its capabilities, troops downrange can't wait for the gears of the Pentagon's bureaucracy to start turning. But when questioned about AFRICOM's readiness issues on March 6, Waldhauser didn't seem too inclined to push hard to address the current state of affairs even with the raging shitstorm dropped on his lap in the aftermath of the ambush.

“The resources that we have are adequate for what we do,” Waldhauser said, referring to AFRICOM as ‘an economy of force organization’ that’s well-suited to do more with less. “Personnel evacuation and medevac and then ISR support … those are things that we would like to have more of and I don't think there's any COCOM who has said before … that he has adequate ISR. But the bottom line is we know we have adequate resources to do what we're supposed to do … we have to be creative we've got to coordinate, but I think the overall budget certainly gives us what we need.”

The U.S currently has 6,500 service members deployed in countries across Africa, service members who conduct an average of 10 missions a day throughout a continent that will likely become the next big front in the Global War on Terror. An absence of a robust, effective medevac/casevac infrastructure means that those service members can’t rely on rescue if they’re in trouble. And while military planners may consider the resources on hand “adequate” for their purposes, the family members of service members left wounded and dying downrange due to lack of government funding will certainly not see it that way.