Editor’s Note: This article by Brendan McGarry originally appeared on Military.com, the premier source of information for the military and veteran community.... 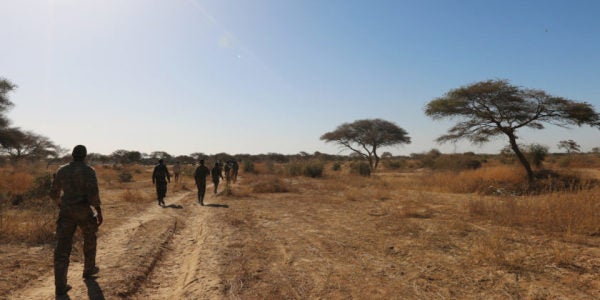 U.S. and coalition troops were ambushed in Niger, the U.S. Defense Department confirmed on Wednesday evening.

U.S. Africa Command didn't immediately confirm a New York Times report that three Green Berets were killed and two wounded in the attack. But the command said a joint U.S. and Nigerien patrol came under hostile fire in the southwest part of the country.

“We are working to confirm details on the incident and will have more information as soon as we can confirm facts on the ground,” the statement reads.

U.S. troops are in Niger provide training and security assistance to Nigerien forces, as well as intelligence, surveillance and reconnaissance, to target extremists in the region, according to the command.

The ambush took place about 120 miles north of the capital Niamey near the border of Mali, where al Qaeda-affiliated militants have launched raids, the Times reported.

The U.S. military has a relatively small footprint in the country.

There were barely more than a dozen American military personnel and civilians in Niger as of June, according to Pentagon personnel statistics, though the figures may not take into account troops deployed to the country on a temporary basis.

This is a developing story and will be updated.