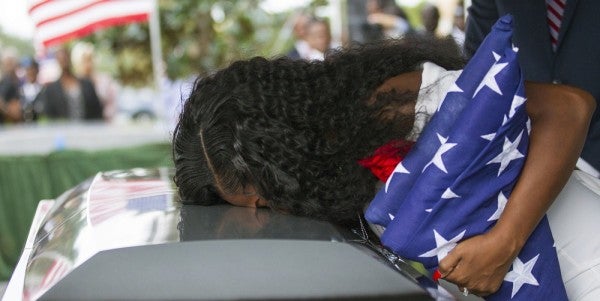 Staff Sgt. Bryan C. Black, Staff Sgt. Jeremiah W. Johnson, Staff Sgt. Dustin M. Wright, and Sgt. La David T. Johnson died after their convoy was ambushed by a large force of ISIS fighters, which “began to envelop” the U.S. and Nigerien troops near the village of Tongo, according to a new unclassified Pentagon summary of the investigation into the Oct. 4, 2017, ambush in Niger.

When the team leader ordered the combined force of U.S. and Nigerien troops to withdraw, the convoy lost sight of a vehicle with Wright, Black and Jeremiah Johnson, which stayed at the ambush site, the summary says:

Staff Sgt. Black, Staff Sgt. Wright and Staff Sgt. J. Johnson were never captured alive by the enemy. As enemy fighters advanced through the ambush site, they fired several additional bursts into the bodies of the three soldiers.

“Unable to reach the vehicle and with enemy forces rapidly closing on their position, they were forced to evade on foot,” the summary says:

The enemy did not capture Sgt. L. Johnson alive. Sgt. L. Johnson’s hands were not bound and he was not executed but was killed in action while actively engaging the enemy.

The 38 remaining members of the team were saved by French and Nigerien forces, the summary says. Sgt. La David Johnson’s body was recovered two days after the ambush.

In March, some media outlets showed video released by the Islamic State, showing the American soldiers being killed during the Oct. 4 ambush. The video included footage of the soldiers’ helmet cameras and showed a soldier falling after getting hit and then being shot again. (Task & Purpose has chosen not to post or share the footage.)

The investigation found several problems in how the mission was planned and executed: The U.S. special operations forces did not conduct pre-deployment training as a collective team; the mission’s concept of operations was not approved at the proper level of command; a captain was the highest ranking commander who knew about the mission’s purpose; and the team did not conduct pre-mission rehearsals before the Oct. 4 mission.

Still, the unclassified investigation summary emphasized there was “no single failure or deficiency” that led to the deaths of the four soldiers.

In the aftermath of the deadly ambush, the commander of U.S. Africa Command is implementing changes to how missions are approved and planned, according to the summary — which does not specify what exactly these changes involve.

“Personnel actions relevant to this incident, including recognition for acts of valor and appropriate administrative or disciplinary action, if warranted, will be addressed by the military commands with administrative authority over personnel at issue,” the summary states.