US Troops In Africa Aren’t Seeking Combat, But They Keep Finding It Anyway

U.S. troops in Africa may be killing bad guys – and getting shot at in the process – but most... 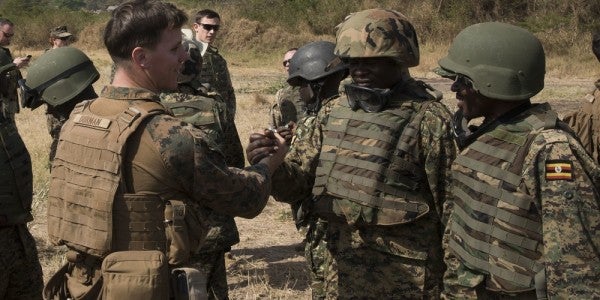 U.S. troops in Africa may be killing bad guys – and getting shot at in the process – but most of them are not there on a combat mission, Department of Defense officials insist.

Despite these repeated clashes, Pentagon spokeswoman Dana White said on Thursday the majority of U.S. troops in Africa are taking part in “train and advise” missions.

“There’s a great deal of ungoverned space within Africa, and we’re helping those security forces increase their capabilities so that they can manage the security situations themselves,” White told reporters during a weekly Pentagon news briefing.

Before both the October and December missions in Niger, U.S. military officials assumed that it was unlikely for U.S. troops to find themselves in combat, he added.

“Patrolling with our Nigerien partners continues – not combat operations,” McKenzie said. “The intent is for our partners to do the fighting, for us to support them up until the last covered, concealed position before they become engaged. We do not intend to seek combat with our forces in Niger.”

However, “the enemy gets a vote” on whether U.S. troops have to join the fight, he acknowledged.

“It’s simply a fact of life,” McKenzie said. “We try to control the environment as much as we can, but if we get into a combat situation, we’re prepared to react to that.”

Because the October and December battles took place roughly 1,100 kilometers from each other, it is unlikely that the ISIS fighters whom U.S. troops killed in December were among the force that killed the four U.S. soldiers in October, he said.

News of the December battle was not reported until more than three months after it happened, in keeping with the Pentagon’s crackdown on publicizing any information that defense officials think could be valuable to enemies.

When asked why the Pentagon did not announce in December that U.S. forces had killed 11 ISIS fighters in Niger, White indicated that the battle was not an isolated incident, arguing that U.S. troops are “often in harm’s way.”

“There are tactical things that happen that we don’t put out a press release about,” White said. “We also don’t want to give a report card to our adversaries. They learn a great deal from information that we put out, and they don’t deserve a report card on how they could be more lethal.”