After Niger, The Army Is Doubling Down On Its Counterterrorism Mission In Africa

The Army is “boosting” security, intelligence, and training operations in the Lake Chad Basin region, the branch announced on Oct.... 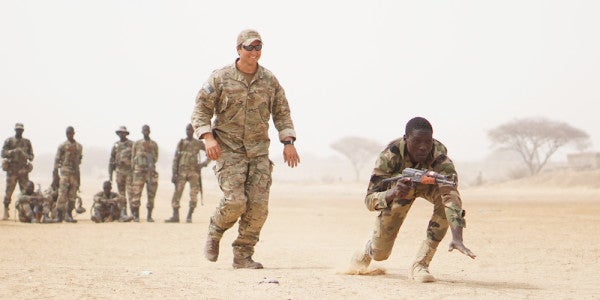 The Army is “boosting” security, intelligence, and training operations in the Lake Chad Basin region, the branch announced on Oct. 26, with 80% of upcoming security cooperation activities involving security forces from Nigeria, Chad, Cameroon, and Niger, where four soldiers deployed with the 3rd Special Forces Group were killed in an Oct. 4 ambush.

While the Army plans on increasing the number of activities with host countries focused on providing “intelligence, surveillance and reconnaissance support as well as logistics and counter-improvised explosive device training,” a U.S. Army Africa spokesman told Task & Purpose that the uptick in partner operations will not involve an increase in the 6,000 U.S. military personnel currently deployed in 53 countries across the continent.

U.S. Army Africa expects to conduct around 271 security cooperation exercises with Lake Chad Basin partner militaries in 2018 alone, a 20% increase from 2017. Without an influx of additional troops, Welch said, U.S. Army Africa is “reprioritizing efforts across the continent” to accommodate an increased focus on the region, mainly to provide logistical and security support for AFRICOM and Cameroon’s joint intelligence, surveillance, and reconnaissance (ISR) efforts.

The “reconnaissance” element may make some observers nervous, though Welch insisted that U.S. troops “do not go on patrol” with partner forces or do so from “cover and concealment” as Chairman of the Joint Chiefs of Staff Gen. Joseph Dunford stated on Oct. 23. But that fateful Oct. 4 joint U.S.-Nigerien excursion was initiated as a “reconnaissance patrol” before Special Forces personnel reportedly expanded beyond their initial operational guidelines in pursuit of a high-value ISIS recruiter, as anonymous U.S. officials suggested to NBC News on Oct. 24. And while Dunford told reporters later that day that AFRICOM was currently investigating whether the detachment deviated from its initial mission, it’s worth remembering that AFRICOM chief Gen. Thomas Waldhauser conceded in a 2017 posture statement that only “20-30%” of its ISR requirements have currently been met.

The U.S. military has been operating in the Lake Chad Basin for years as part of the Pentagon’s ever-expanding post-9/11 counterterrorism missions abroad. As of 2013, when President Barack Obama informed Congress of the deployment of 40 troops to Niger to set up a drone base and assist French forces in gathering intel on Al Qaeda-affiliated militants in neighboring, U.S. Army Africa was already conducting seven separate training missions in West and Central Africa in support of the African-led International Support Mission to Mali forces organized in response to rising militant activity in the region. As the Army refocuses on “advise and assist” missions around the globe as part of its modernization effort, those bastions of U.S. military power in Africa will likely remain.

Related: Lindsey Graham Damn Well Knew We Were In Niger. Here’s Why That Matters »

But according to the Army, the changing posture in the Lake Chad Basin region doesn’t necessarily reflect a buildup of combat troops ready for a round of revanchist ass-kicking, or even a reshuffling of resources to accommodate the gap left by Chadian military assets, which recently withdrew from eastern Niger — a move that some media outlets prematurely identified as a major factor in the deadly Oct. 4 ambush. According to the Army, it’s the fact that Lake Chad itself “has drastically shrunk due to inefficient damming and irrigation methods” in recent years, which the command claims is the root cause of the food insecurity and and economic instability that has fueled the rise of ISIS and Boko Haram in the region.

“That's putting a lot of stress on the livelihood of the 40 million people that live in that area,” said Army Brig. Gen. Eugene J. LeBoeuf said in a statement. “That's where our focus lies primarily in building that capacity for our host nations to be able to do those operations themselves.”

To a certain point, this fits in line with the Pentagon’s current approach to resource scarcity, climate-related or otherwise: Environmental factors like drought “aggravate stressors abroad such as poverty, environmental degradation, political instability, and social tensions,” according to the DoD’s 2014 Quadrennial Defense Review. “Anything that weakens the region is against U.S. interests; anything that weakens its Western allies likewise is against its interests,” as RAND’s Michael Shurkin put it on Oct. 25. “And speaking of allies, France currently is at war in Niger and in several of its neighbor nations. The French effort helps but is insufficient. They could use help themselves.”

In reality, the retasking is simply the latest effort by U.S. Army Africa to reshuffle its chess pieces in a region beset by transnational jihadist groups. As national security reporter Nick Turse at The Intercept points out, the DoD has had a shifting mosaic of nations under the Trans-Sahara Counterterrorism Partnership, which funneled hundreds of millions to nations like Niger and Mali for years before the Obama drone base letter ($288 million from 2009 to 2013 alone, per Truse) for “train and equip” security force assistance missions focused on everything from weapons training and civil-military institution building to “increas local anti-terrorism capabilities and encourag local populations to cooperate with military forces.”

And according to Turse, those efforts have largely cause more harm than good. “The role of a U.S.-trained officer in overthrowing the government of Mali is yet another case of arms and training programs backfiring and creating a more chaotic environment in which terrorist organizations can grow,” William Hartung, director of the Arms and Security Project at the Center for International Policy, told The Intercept. “While the roots of terrorism are complex, it is fair to say that the larger U.S. military presence has, at a minimum, served as a recruiting tool for the growing number of terrorist groups operating in West Africa.”

Despite this, U.S. Army Africa is pressing ahead with counterterrorism operations in the Lake Chad Basin region. According to Welch, USARAF “ not anticipate changes to the operational tempo” by “maximizing Army resources that include Army Reserve, National Guard, and Army civilians.” And when Dunford spoke to reporters on Oct. 22, he stated that U.S. troops in Niger had already resumed training and advisory operations in the region despite the never-ending political maelstrom back home.

“This area is inherently dangerous,” Dunford told reporters. “We're there because ISIS and Al Qaeda are operating in that area.”