‘The Message From Mattis Is Basically Square Your Shit’: DoD Scrambles For Facts In Niger

In the month since four Army Special Forces and five local security forces troops were killed by jihadi-aligned militants in... 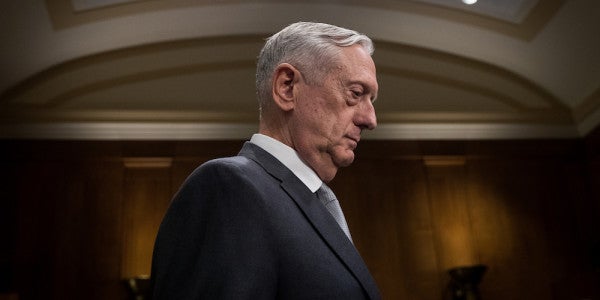 In the month since four Army Special Forces and five local security forces troops were killed by jihadi-aligned militants in Niger, the Department of Defense has insisted that the ambush was a complete surprise, catching the joint patrol off guard while they were on a routine mission to meet with local leaders in a village near the Mali border.

But the government of Niger is telling a different story. ABC News reported on Nov. 2 that the mission “was always” to kill or capture Abu Walid al-Sahrawi, a terror leader code-named “Naylor Road” with ties to both ISIS and Al Qaeda, according to four separate senior Nigerien officials.

While the Department of Defense told Task & Purpose the U.S. personnel deployed on the fateful missions “were unequivocally not directed to do a, 'kill or capture mission,’” the month of ambiguity surrounding the Pentagon’s Niger narrative has left America’s military leaders exasperated. Secretary of Defense James Mattis has become increasingly frustrated with U.S. Africa Command leadership — particularly Marine Gen. Thomas D. Waldhauser, the top general in charge of the command — over the delayed fact-finding in the immediate aftermath of the ambush.

“The message from Mattis is basically ‘Square your shit,’” one U.S. military official recently told Task & Purpose. “We need to fix the narrative. Now.” (U.S. Africa Command did not immediately respond to requests for comment from Task & Purpose.)

The new ABC News report expands on a previous report in which senior U.S. intelligence officials had alleged the Niger patrol only “turned into” a kill-or-capture excursion after the contingent arrived at a nearby village. Whether or not the mission was kill-or-capture from the start, it was authorized “without additional support requested by Nigerien forces,” even after a team leader in country from the 2nd Battalion, 3rd Special Forces Group “expressed concerns about the mission after a second U.S. and Nigerien unit was unable to join them for the operation,” according to ABC News.

That second team — a contingent of U.S., French, and Nigerien special forces publicly acknowledged on Oct. 23 by the Joint Chiefs of Staff director, Marine Lt. Gen. Kenneth F. McKenzie Jr. — was reportedly on a separate, parallel kill-or-capture mission “in the area” when the ambush occurred, U.S. intelligence officials told UPI.

Concerns among U.S. forces ended up being well-founded. Both U.S. and Nigerien officials believe the villagers “set up” the patrol to stumble into a horde of more than 50 heavily-armed militants. But that doesn’t square with the Pentagon’s assertion that they had no intelligence suggesting enemy contact. It also casts doubt on the DoD’s assertion that the counterterrorism forces deployed in the Lake Chad Basin region were solely for non-combat “advise and assist” missions.

“We don’t accompany local partner forces when contact with the enemy is expected,” Chairman of the Joint Chiefs of Staff Gen. Joe Dunford emphasized to the press during an Oct. 23 briefing at the Pentagon. “Either we stay back in cover and conceal positions, or we don’t even go.”

These discrepancies have put the Pentagon in hot water. They’re relying on U.S. Africa Command, the combatant command leading the DoD investigation into the ambush, to parcel out information in morsels to the rest of the defense establishment.

With U.S. Army Africa retasking military personnel from across the continent for accelerated security, intelligence, and training operations in the Lake Chad Basin region — 80% of upcoming security cooperation activities involving security forces from Nigeria, Chad, Cameroon, and Niger, the branch announced on Oct. 26 — it seems likely that those “advise and assist” missions that have become a staple of the Global War on Terror will increasingly involve kinetic counterterrorism options. And that could mean more caskets returning home to Dover Air Force Base, whether the Pentagon settles on a new narrative or not.