The deadly ambush that killed four Army Special Forces personnel in Niger on Oct. 4, and the resulting rescue operation,... 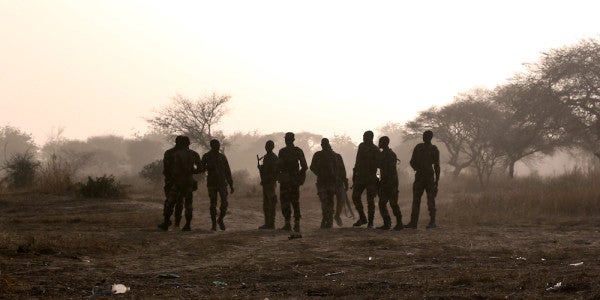 The deadly ambush that killed four Army Special Forces personnel in Niger on Oct. 4, and the resulting rescue operation, were clouded by misinformation and poor planning, according to two extensive newreports.

One report suggests that one of the American KIAs, Army Sgt. La David Johnson, remained alive in captivity for hours while DoD officials flailed in the fog of war. And though the dueling reports paint a damning picture of negligence and underwhelming responses by U.S. defense officials, they also highlight a growing challenge on the horizon for the global war on terror in Africa.

On Oct. 5, U.S. Africa Command announced that four Army soldiers with the 2nd Battalion, 3rd Special Forces Group out of Fort Bragg, including two Green Berets, were killed while “providing advice and assistance to Nigerien security force counter-terror operations” 200 kilometers north of the capital city of Niamey, on the Niger-Mali border. But according to a new report from BuzzFeed News, the ambush was the product of “reckless behavior” during a “poorly executed” surveillance and reconnaissance mission against senior commanders of the Islamic State in the Greater Sahara, in which soldiers “rushed into a hornet’s nest of militants with insufficient intelligence.”

U.S. and Nigerien officials interviewed by BuzzFeed News appear to confirm prior reports that emerged in the aftermath of the deadly raid: The U.S. detachment, accompanied by some 30 Nigerien security forces, deviated from a pre-planned patrol mission to pursue high-value militant lieutenants without any prior assessment or contingency plan; instead, they remained in a village on the Niger-Mali border long after the group was due back at Ouallam for a debriefing. Operating in the dark, without additional support, the patrol presented itself as a prime target for militants to muster overwhelming force.

“They let their guard down,” a Nigerien general told BuzzFeed News. “There are a dozen villages around the frontier with Mali. The enemy took advantage of informants in these villages.”

Related: US Troops Were Pursuing High-Value Target Prior To Deadly Niger Ambush »

While the BuzzFeed News report puts the responsibility for the botched raid on Special Operations Command-Africa (SOCAFRICA) personnel, it’s unclear whether the patrol’s decision to deviate from the pre-planned mission emerged within the Special Forces detachment or with previous input from U.S. Africa Command. Indeed, the well-known intelligence, surveillance, and reconnaissance deficits endured by the Department of Defense in Africa — AFRICOM chief Gen. Thomas Waldhauser conceded in a 2017 posture statement that only “20-30%” of the command’s ISR requirements have been met — almost certainly complicated the incident response and aftermath.

U.S. defense officials confirmed to Task & Purpose that it took at least six weeks for AFRICOM officials and regional partners to fully secure the ambush site and conduct a thorough crime scene investigation, as well as compile a moment-by-moment account of the two-hour firefight.

To a certain extent, such gaps are understandable: the rise of global terror networks has posed a significant challenge to geographically defined combat commands, and U.S. military sources indicated that AFRICOM’s relative newness and broad area of responsibility present unique logistical and organizational problems. But if those ISR limitations in Africa created a fog of war, U.S. officials only exacerbated it as they scrambled for fact amid growing political pressure in the aftermath of the raid.

Also on Dec. 10, the Intercept’s Nick Turse reported that not only had Army Sgt. La David Johnson survived the initial ambush, but AFRICOM was attempting to persuade multiple journalists to withhold the reports of Johnson’s ostensible capture by militants while the military attempted a rescue. (Turse’s tip-off apparently came after an embarrassing lapse in operational security, in which AFRICOM media relations personnel accidentally put Turse on speakerphone on Oct. 5 instead of disconnecting him, which, lol.)

“We’ve been able to talk a few off the ledge, but it’s gonna break,” AFRICOM public affairs chief Col. Mark Cheadle reportedly told fellow communications personnel of the command’s delicate dance with the media over Johnson’s status. “By talking about it all you do is put this young man’s life, and those who are trying to help him, in further danger.”

Related: T&P;'s Coverage Of The Ambush In Niger »

Media blackouts amid ongoing military operations are common, but the military’s opacity on the Niger op ended up drawing ire from lawmakers and the public. Johnson’s remains were recovered by U.S. military personnel two days after the fateful incident, several kilometers away from the initial ambush site; On Nov. 10, the Washington Post reported that Johnson “was found with his arms tied and a gaping wound at the back of his head.” Johnson’s widow had previously told media outlets that she was not allowed to view her husband’s body; On Nov. 12, two days after the Washington Post report, AFRICOM investigators recovered “additional human remains” belonging to Johnson.

As Turse points out, all these facts ran directly counter to DoD talking points, further complicating efforts by U.S. military officials to explain the botched raid. As Pentagon spokesman Maj. Audricia Harris told The Intercept, “[I]nitial findings did not show evidence Sgt. Johnson was ever in hostile hands”; she further asserted that until AFRICOM completes its full investigation, “everything that you read is conjecture and speculation.”

There’s plenty of evidence the military is anxious to get to the bottom to the Niger affair: Frustration with AFRICOM has ballooned across the various service branches and theater-level commands in the aftermath of the ambush, all the way up to Secretary of Defense James Mattis. “The message from Mattis is basically ‘Square your shit,’” one U.S. military official told Task & Purpose on Nov. 2. “We need to fix the narrative. Now.”

All of the reports so far — on the “reckless behavior” suggested by the Green Berets’ rapid mission-shift, the hamfisted reponse from AFRICOM, and the disconnect between the Pentagon and regional officials — suggest a major problem on the horizon for the Global War on Terror. With ISIS denied strongholds in Iraq and Syria, the center of gravity for global terrorism is increasingly shifting to Africa, especially the countries surrounding the Lake Chad Basin that are enjoying a newfound surge in U.S.-led ISR operations.

Sure, U.S. Special Operations Command may have more elite troops in Africa than anywhere else but the Middle East. But the months-long saga Niger saga suggests that both defense officials and the American public will remain in the dark about how the new war on terror in Africa actually goes down.

And if there’s any long-term consequence of the Niger affair, defense sources suggest, it’s that AFRICOM, though just over a decade old, may end up putting the command’s structure and capabilities under a microscope. “Nobody has been able to explain the whole engagement to me,” one U.S. defense official told Task & Purpose. “But that’s what happens when you have an entire massive, complicated continent managed by a four-star in Stuttgart.”