The ISIS bastards who killed four U.S. soldiers in Niger last year were thwarted in an attempt to steal at... 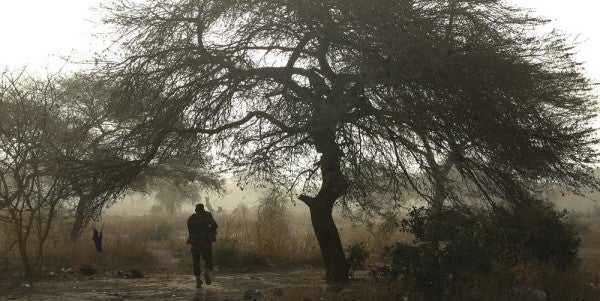 The ISIS bastards who killed four U.S. soldiers in Niger last year were thwarted in an attempt to steal at least three of their bodies, an investigation has determined.

“Our fallen heroes were stripped of any serviceable equipment,” Army Maj. Roger Cloutier Jr., who led U.S. Africa Command’s investigation, said during a Pentagon news conference. “Two were found in the back of an enemy vehicle and one beside it. They were driven off by French aircraft. The evidence indicates that there was an intent to take them with them.”

A quick reaction force of Nigerien troops found the bodies of the three soldiers, Cloutier said. La David Johnson’s body was not moved from the spot where he made his last stand underneath a thorny tree.

“Sgt. La David Johnson, first of all, died actively engaging the enemy,” Cloutier said. “He was never captured alive. His hands were never bound. His body was treated like all the other remains – both U.S. and Nigerien: His serviceable equipment was stripped and taken from him.”

The investigation found a series of errors leading up to the deadly mission and recommended taking “appropriate action” against three people for specific failures, such as mischaracterizing the U.S. troops’ initial mission as civil-military reconnaissance, Cloutier said.

Defense Secretary James Mattis has tasked the Army and U.S. Special Operations Command with ensuring that commanders in a supervisory and oversight role are held accountable for leadership failures leading up to the ambush – including failures not mentioned in the investigation, said Marine Gen. Thomas Waldhauser, head of AFRICOM.

“Inappropriate for us at this point in time to say specific punishments, but again, the chain of command responsibilities will be looked at,” Waldhauser said at Thursday’s press conference.

Both Waldhauser and Cloutier emphasized that U.S. troops fought bravely during the ambush and indicated that some service members will be recognized for their valior under fire.

“There will be awards,” Waldhauser said. “One of the reasons it has taken a while is that we didn’t get involved in the awards process while the investigation was ongoing because that would have led it crossways with information and the like.”

When asked if any of the U.S. troops who fought in Niger should be considered for the Medal of Honor, Waldhauser replied: “I don’t have that level of detail at this point in time. That will come up from the process.”