Combat Ribbons Or Not, Afghanistan Marines Are ‘Very Much In Combat,’ Commander Says

The Marines in Afghanistan are definitely in combat, even if they are not being awarded the Combat Action Ribbon, the... 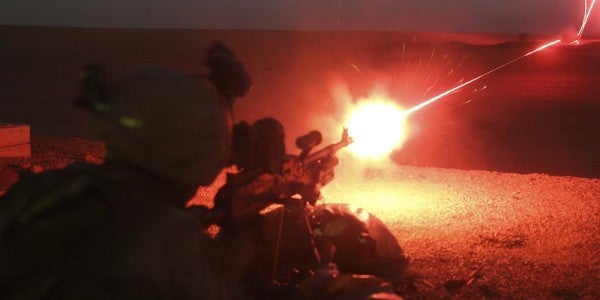 The Marines in Afghanistan are definitely in combat, even if they are not being awarded the Combat Action Ribbon, the former commander of Task Force Southwest said on Thursday.

“It’s absolutely a combat mission,” Brig. Gen. Roger Turner Jr. told reporters at a roundtable. “The only difference is we’re not maneuvering directly on the enemy. From the command element perspective: It’s full spectrum combat. We shoot at the enemy, they shoot at us.”

Turner led the task force of roughly 300 Marines from April 2017 until January. During that time, Marines helped Afghan troops and interior ministry forces go on the offensive in Helmand province, the home of many senior Taliban leaders and a significant source of the opium that feeds the Taliban’s coffers, he said.

Despite being deployed to Afghanistan for nine months, none of the Marines in the task force were awarded the Combat Action Ribbon, Marine Corps Times has reported. The CAR is a coveted decoration, especially by younger Marines, because it certifies combat experience.

But on Thursday, Turner cautioned against using the CAR as a litmus test to determine if the Marines in Afghanistan are on a combat mission.

With help from the Marines, Afghan security forces went on the offensive for 250 days of the 280-day deployment, Turner said. The Marines advised the Afghans at various levels of command and helped coordinate artillery and air support.

Even though the Marines did not fight alongside Afghan units, they were attacked by Taliban rockets and mortars about 20 times during the deployment, Turner said. None of the Marines were wounded.

On Jan. 15, Turner transferred command to Brig. Gen. Benjamin Watson, who commands a larger task force that will be able to have U.S. military advisers permanently assigned to Afghan battalions, Turner said.

Watson has told Task & Purpose that he has the authority to allow Marines to accompany Afghan troops and police into battle, if needed.

“Whether or not we exercise that authority is going to depend on how we assess the situation at the time, and obviously I’m not going to get into specifics on that,” Watson said in a Jan. 15 interview.

After nearly 16 years of war in Afghanistan, it is not clear how much of territory the Taliban controls outright or is contesting. Marine Lt. Gen. Kenneth F. McKenzie Jr., director of the Joint Staff, said the U.S. estimates that the Afghan government controls about 60%of the country, but a recent BBC report claims the Taliban is active in 70% of Afghanistan.

McKenzie said he does not believe the BBC story is accurate, adding that he “couldn’t completely follow their logic as stated in the article.”

“We certainly don’t think that the Taliban has a presence to some degree in 70% of the countryside – and we would disagree with that,” McKenzie told reporters Thursday during a Pentagon news briefing.