The U.S. military has begun shifting troops and equipment from Iraq, where ISIS is trying to establish an insurgency, to... 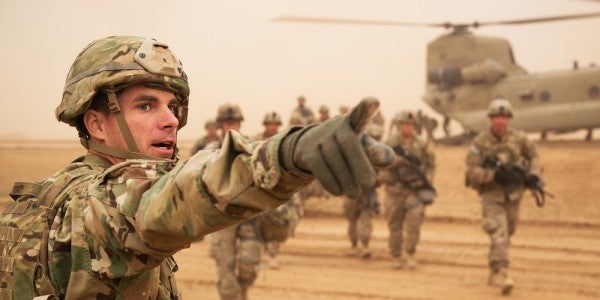 The U.S. military has begun shifting troops and equipment from Iraq, where ISIS is trying to establish an insurgency, to Afghanistan, where the Taliban and other groups are waging a more conventional fight, officials told Task & Purpose on Monday.

While Iraqi officials and defense contractors refused to say how many troops are being moved from one war zone to the other, as first reported by the Associated Press, the overall number of U.S. troops is expected to remain close to current levels: about 5,200 in Iraq and roughly 14,000 in Afghanistan, said Pentagon spokesman Marine Maj. Adrian Rankine-Galloway.

More troops in Afghanistan will allow the United States to place advisors and enablers at the battalion level of Afghan military and police units, Rankine-Galloway told Task & Purpose.

As ISIS has moved from fighting on the battlefield to launching suicide attacks against civilians, the U.S. military has less of a need for artillery and other combined-arms units in Iraq, he added.

“We have a government with a security force that has secured its own borders and has removed ISIS’ ability to hold onto territory,” Rankine-Galloway said. “That [Iraqi] force is now engaged in internal security operations: disrupting terrorist plots, rooting out terrorist caches of explosives and weapons. You don’t need things like artillery and HIMARS [High Mobility Artillery Rocket System] to do those sorts of missions.”

U.S. troops in Iraq now and those deploying there in the future will focus on helping the Iraqis stop the flow of foreign fighters into their country from Syria, developing the Iraqi air force and training Iraqi federal police, said Air Force Col. John Thomas, a spokesman for U.S. Central Command.

During the conventional fight against ISIS from 2014 to 2017, U.S. advisers trained Iraqi federal police units to fight as an infantry force alongside the Iraqi Counter Terrorism Service, Thomas said on Monday.

“The federal police, therefore, weren’t building that skill set of policing and border security,” Thomas told Task & Purpose. “Now that the major urban combat in Iraq is over … we’re trying to help them buttress their internal security policing forces.

“Soldiering, weapons use and deployment, and operating as teams aren’t going to be the same as how to detain someone and question them, border security, how to do community policing and trying to keep the peace, rather than be on the offensive, like they were before.”

Meanwhile, the U.S. mission in Afghanistan remains focused on making the Afghan security forces as combat effective as possible against the Taliban and other terrorist groups, such as ISIS-Khorasan in the eastern part of the country.

Related: The 1st SFAB’s Afghan Deployment Is A Moment Of Truth For The Global War On Terror »

To that end, the Army is deploying more than 800 specially trained advisers to Afghanistan this spring as part of the first Security Force Assistance Brigade. The soldiers come from across DoD and academia and include former advisers and special operators, 1st SFAB deputy commander Col. Bryan Chivers, told Task & Purpose in a January interview.

Defense Secretary James Mattis recently told reporters that the United States has no plans to dramatically increase the number of U.S. troops in Afghanistan.

“If you mean another thousand troops, or another 5,000 — I have no plans along those lines,” Mattis said Friday in answer to a reporter’s question.