ISIS may have lost most of its self-declared caliphate, but a new jihadist group is trying to rise from ISIS’... 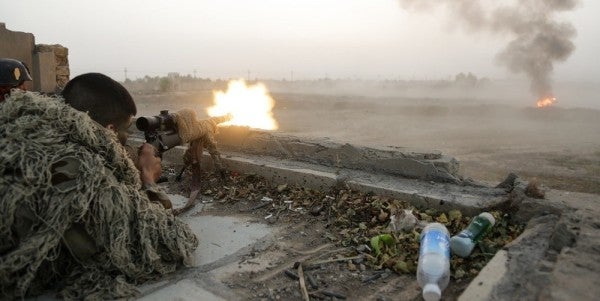 ISIS may have lost most of its self-declared caliphate, but a new jihadist group is trying to rise from ISIS’ ashes in northern Iraq.

The group, whose name is translated from Arabic as “the White Banner” or “the White Flags,” is an ISIS-offshoot that is located primarily around Kirkuk and Tuz Khurmatu, said Army Col. Ryan Dillon, a spokesman for the U.S.-led coalition fighting ISIS in Iraq and Syria.

But the White Banner has managed to survive many clearing operations in Diyala province, northeast of Baghdad, says Jennifer Cafarella, of te Institute for the Study of War in Washington, D.C.

Currently, the group is relatively small with between 150 and 700 or so fighters, Cafarella told Task & Purpose on Tuesday. It was formed by jihadists who had left Hawija, possibly including current or former members of Al Qaeda, she said.

“The White Flags represent a post-ISIS insurgency, and therefore reflect that the Iraqi state will continue to face a security threat from within its Sunni population until and unless it actually address the core sources of grievances that gave rise to ISIS to begin with,” Cafarella said. “It reflects that not only can ISIS live on, but the alienation of Sunni populations from the Iraqi government can spawn additional post-ISIS insurgencies.”

Based in the Hamrin Mountains, the jihadist group is led by Hiwa Chor, who used to belong to al Qaeda in Iraq and later ISIS, BuzzFeed reported on April 1. Chor reportedly did not share ISIS’ ambitions of establishing a local caliphate and eventually joined forces with a Turkmen militant from Diyala province.

Much about the group is unclear, said Daveed Gartenstein-Ross, a senior fellow with the Foundation for the Defense of Democracies think tank in Washington, D.C. Analysts differ on whether the group is the next iteration of ISIS, a new Al Qaeda branch, or a Sunni nationalist movement that is pushing back against Shiite and Iranian influence, he said.

While the Iraqi government views the White Flags as a strategic threat because the group has begun a campaign of kidnapping and laying roadside bombs, other militias and terrorist groups pose a more serious threat to the Iraq, he said.

Cafarella said she has not seen any indications that the White Banner is growing, but it is hard to determine because so little about the group is known.

“There is a lack of good reporting on this group, in part because I do think that there is some effort by the PMF [Popular Mobilization Forces] to suppress coverage of this group and to claim that Diyala is secure,” she said. “The group is also not putting out its own media, from what we can tell, so we’re reliant on local Iraqi reporting.”