A U.S. service member was killed in Iraq when an improvised explosive device struck his vehicle, the Department of Defense... 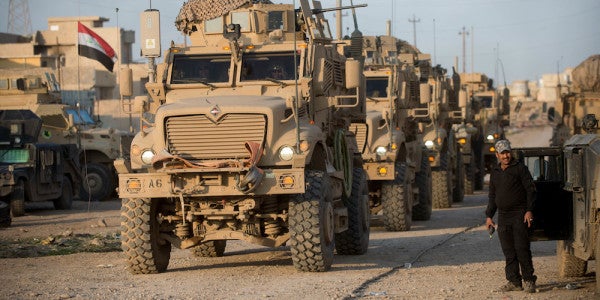 A U.S. service member was killed in Iraq when an improvised explosive device struck his vehicle, the Department of Defense announced on Oct. 1, the 13th American combat death in Operation Inherent Resolve, the three-year-old campaign against ISIS in Iraq and Syria, and the 8th fatality in 2017 alone.

While the Pentagon declined to provide specifics regarding the incident, spokesman Eric Pahon confirmed to Stars and Stripes that another service member was injured during the attack.

The attack was the latest known fatality for coalition forces following the death of a French non-commissioned officer from the elite 13th Parachute Dragoons Regiment, who was killed on Sept. 23 while advising regional partners as part of OIR, the BBC reports. It was whether he died in Iraq or Syria.

The last casualties for U.S. forces under OIR came in August when two service members were killed and five more were injured during combat operations in northern Iraq. The Department of Defense said at the time that initial reports suggested the incident “was not due to enemy contact.”

This most recent death of a U.S. service member comes amid the steady uptick in operational tempo among U.S.-led forces in Iraq and Syria since President Donald Trump took office in January. Since expelling ISIS fighters from their so-called caliphates de facto capital in Mosul in July, bombing sorties against militant forces have reached their highest levels since the start of the campaign in 2014.

On Oct. 1, OIR spokesman Col. Ryan S. Dillon stated on Twitter that the U.S.-led coalition was conducting 40 airstrikes a week in support of Iraqi Security Forces in their offensive against ISIS forces in the city of Hawija; according to Reuters, the militants torched three oil wells in the city, west of oil depot and remaining ISIS stronghold Kirkuk, to stymie advancing coalition forces.