How Many Air Force Bombs Dropped On ISIS In Iraq And Syria Were ‘Duds’?

In the three years since President Barack Obama first declared war on ISIS, the U.S-led multinational coalition has dropped tens... 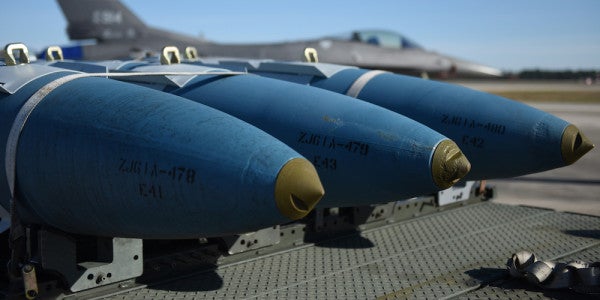 In the three years since President Barack Obama first declared war on ISIS, the U.S-led multinational coalition has dropped tens of thousands of bombs on enemy targets across Iraq and Syria as part of Operation Inherent Resolve. But for several months after the Pentagon initiated airstrikes against the terror group, a significant number of U.S. munitions were considered “duds” — and the Air Force’s anti-ISIS strategy may have been to blame.

That’s according to data presented by Maj. Brian Baker of the U.S. Air Force Regional Plans and Posture Division at the National Defense Industry Association’s Precision Strike Annual Review on March 29. Air Force records presented by Baker indicated that somewhere between 11% and 19% of the munitions deployed against ISIS from August to November 2014 “failed” due to lower-than-expected impact angles or fuze delays.

When you suss out those stats, the data suggest that around 4,400 bombs released during close air support, escort, and interdiction missions “either not have the intended effect or not detonate entirely,” as the War Zone, which first surfaced this report, put it on May 31.

Munitions failures aren't totally atypical or unexpected — but this one was significant because it was based on a strategic misstep: exporting the Afghan air war to Iraq and Syria without fully adjusting to local conditions.

Related: The Pentagon Has Dropped So Many Bombs On ISIS We’re Literally Running Out»

According to Baker, it took OIR commanders some time to retool the close air support and interdiction missions executed in the conflicts in Iraq and Afghanistan for a “drastically different” target set. As an OIR spokesman told War Is Boring in 2015, CAS sorties “may wind up supporting strikes that look more like interdiction, or vice versa,” leading to an operational mismatch in munitions.

Here’s some excellent tactical analysis from The War Zone:

This included large structures, bridges, armored vehicles, and other hard targets, rather than just lightly armed insurgents in the open. Peppering these targets with a burst of fragments might rattle the occupants, but couldn’t incapacitate them or destroy their cover. If the proximity fuze had a delay in detecting an object or didn’t sense anything due to a low impact angle, the weapon might not go off at all. On top of that, the bombs wouldn’t have been useful at all for knocking out tanks, bridges, or tunnels.

The Air Force had begun to respond to these problems by the end of 2014, most notably starting to use 2,000-pound class GBU-31/B JDAMs. These weapons often had the BLU-109/B penetrating warhead, which could break through the roof of a concrete building before exploding within for maximum damage

Let’s try to break down what this means, exactly, in terms of waste. Assuming the less-than ideal 19% failure rate, around 835 bombs did precisely dick downrange. To be fair, this is a relatively small portion of the more-than 65,000 munitions deployed by the Air Force between the start of OIR, in August 2014, and December 2016, according to CENTCOM statistics.

Related: How Many Air Force Bombs Dropped On ISIS In Iraq and Syria Were Duds?»

And it’s hard to estimate what fraction of the $2.4 billion shelled out by the Pentagon since the start of OIR was literally thrown away above the battlefields of Iraq and Syria. According to Baker, the GBU-38(V)4/B and 5/B Joint Direct Attack Munition (JDAM) guidance kits — usually affixed to Mark 82 unguided munitions like the BLU-126/B Low Collateral Damage Bombs (LCDB) and BLU-129/B Very Low Collateral Damage Bombs (VLCDB), as the War Zone points out — were the primary source of bomb problems during those opening months.

Assuming costs of around $2,000 per Mark 82 bomb and $25,000 per JDAM guidance kit, the data suggests around $22.5 million in wasted munitions in what amounted to several months of adjustment rounds. Should that figure be accurate, it’s not a good look for the DoD.

When contacted for comment, both Centcom and Air Force Global Strike Command referred Task & Purpose to Combined Joint Task Force-OIR. A spokesman for CJTF-OIR told Task & Purpose that the command, unable to meet our publishing deadline, would provide data at a later date.