The Air Force is currently in the middle of a major precision guided munitions shortage stretching back nearly four years — and according to the service's top general, budget jousting in Congress could prove "truly damaging" to the Pentagon's ability to fix the problem 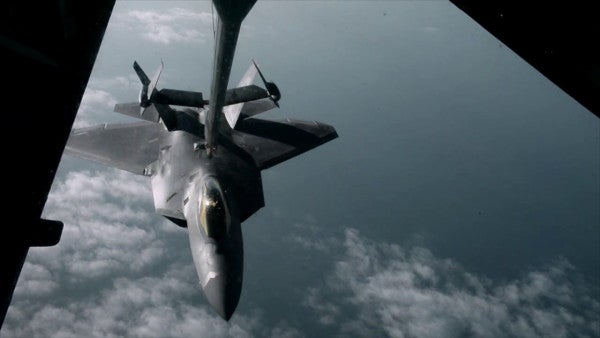 The Air Force is currently in the middle of a major precision guided munitions shortage
stretching back nearly four years — and according to the service's top general, budget jousting in Congress could prove “truly damaging” to the Pentagon's ability to fix the problem.

“I have to go to them and say, 'Hey, I don't know exactly how many of these weapons I'm going to buy from you this year because I can't do any new ,” Goldfein said,
according to Military.com.

“And I know if I ever get the money, I'm going to buy this amount of weapons, so I want you to keep this very sophisticated workforce with high-level security clearances … and I only have six months to get a year's worth of munitions, so I need you to be ready.''

Public affairs officials from the Air Force and Air Combat Command did not immediately respond to requests for comment.

This isn't the first time this has happened. Speaking at an Air Force Association symposium back in September 2017, then-Air Force Secretary Heather Wilson
stated that congressional lallygagging over the fiscal year 2018 defense budget would dramatically undermine the branch's ability to replenish the missile and bomb stockpiles that were rapidly depleted by the accelerating air campaign of Operation Inherent Resolve.

On the upside, OIR is no longer draining munitions stockpiles as quickly as it once was. According to the latest batch of Air Force Central Command airpower statistics released in September, the U.S. has only conducted roughly 4,251 combat sorties so far this year, down from 8,713 during all of 2018 and far below the peak of 39,577 weapons releases in 2017.

However, the same airpower statistics reveal a surge in sorties conducted in support of the NATO-led Resolute Support mission in Afghanistan: the number of combat sorties has grown from 947 in all of 2015 to 7,362 in all of 2018, with 2019 sorties currently at 5,431 as of September 30th, an uptick that's only accelerated the Pentagon's demand for munitions.

“We're very focused on munitions capacity, because we've been dropping a lot of weapons,” Air Force acquisition chief Will Roper said in February,
per Air Force Magazine, noting that the Air Force has dropped “over 70,000 weapons on ISIS, … and we need to be able to buy back many of our weapons at scale.”

That's where the congressional trouble comes in: if lawmakers should reach an impasse on this year's defense appropriations bill, a continuing resolution would not leave the service's munitions procurement efforts at
fiscal year 2019 levels, but impact the critical weapons systems the Air Force needs to accomplish its mission. From Air Force Magazine:

The key weapons in the fight are the satellite-guided Joint Direct Attack Munition, or JDAM, which comes in variants ranging from 500 pounds up to 2,000 pounds; the AGM-114 Hellfire laser guided missile, which equips Army helicopters as well as Air Force MQ-9 Reaper remotely piloted aircraft; the Small Diameter Bomb, which is a 250-pound satellite-guided munition; and Advanced Precision Kill Weapon System, or APKWS, a seeker head for Hydra rockets carried by helicopters and F-16 fighters. These weapons have been used the most in the war against ISIS since the rules of engagement demand extreme precision: ISIS targets are usually mixed in among civilians, and the coalition has made minimizing civilian deaths a top priority.

Among the other Air Force programs that would suffer,
according to Military.com: the new F-15EX fighter jet, advanced new sensors for the F-22 Raptor, critical maintenance modifications for the F-35, not to mention $466 million in disaster relief and modernization efforts Tyndall Air Force base in Florida and Offutt Air Force Base in Nebraska, both of which are still recovering from hurricane and flooding damage in recent years.