The Air Force is currently investigating an August incident that saw rockets outfitted with white phosphorus warheads spill out of a military vehicle onto an Tucson roadway, Task & Purpose has learned 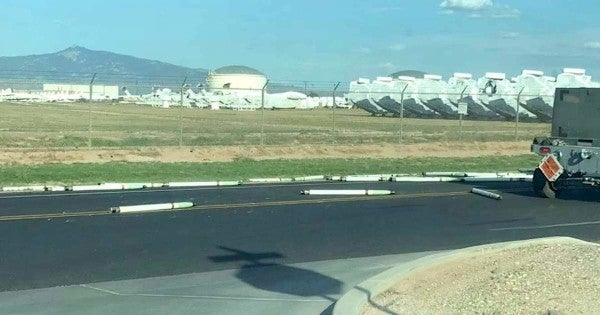 The Air Force is currently investigating an August incident that saw rockets outfitted with white phosphorus warheads spill out of a military vehicle onto a Tucson roadway, Task & Purpose has learned.

A photograph of the incident taken on Aug. 16 by a passing airman and first published on the popular Air Force amn/nco/snco Facebook page shows more than a dozen Hydra 70 2.75-inch air-to-ground rockets covering a road that appears adjacent to the aircraft boneyard at Davis-Monthan Air Force Base in Tucson, Arizona.

The rockets appear to be outfitted with the sea-foam green M156 and M259 white phosphorus warheads, the same type that an Air Force A-010 Thunderbolt II assigned to the 354th Fighter Squadron accidentally fired off during a training exercise on Sept. 5.

According to the photographer, an airman stationed at Davis-Monthan, the rocket spill is the second such mishap at the base so far this year.

A spokesman for the 355th Wing based at Davis-Monthan confirmed to Task & Purpose that the August rocket spill captured in the photo was under investigation, but declined to confirm additional details regarding the personnel involved or if was an isolated incident.

“A lot of the information regarding the incident will not be released due to concerns regarding our operational security,” the spokesman said. “We cannot speak to the photo, as it was not released through this office, nor are we able to release photos from the incident, due to the investigation.”

As air-to-surface munitions, Hydra 70 rockets are usually deployed from the Army's OH-58D Kiowa Warrior and AH-64D Apache Longbow and the Marine Corps' AH-1 Cobra, although the Mk 66 Mod 2 rocket motor variant was designed for use by both the Air Force and Navy.

In recent years, the Air Force has explored the rapid fielding of the laser-guided Advanced Precision Kill Weapon System II to turn the unguided Hydra into a precision-guided munition compatible with the A-10, F-16 Fighting Falcon, and F/A-18 Hornet fixed-wing aircraft.

White phosphorus warheads are frequently deployed by the Air Force during training to produce smoke for concealing troop movement and to identify targets, according to Air Combat Command. When exposed to air, the substance burns at around 5,000 degrees Fahrenheit.