Investigators did not find anyone who said Hyten acted unprofessionally toward Spletstoser, but several witnesses described Spletstoser as hostile and explosive 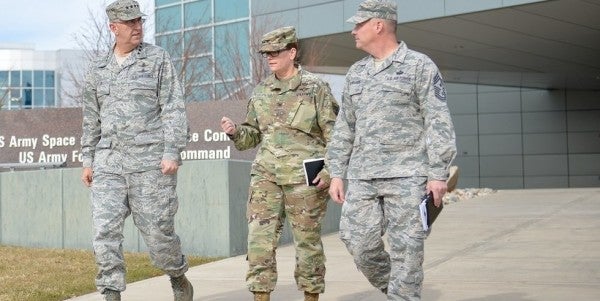 An Air Force investigation into sexual assault allegations against Air Force Gen. John Hyten “was unable to find indications of an unprofessional relationship either electronically or through witness interviews,” according to a redacted copy of the investigation, which was released on Friday.

The full Senate is expected to vote on Hyten's nomination to become the next vice chairman of the Joint Chiefs of Staff in September. He has denied the allegations against him.

Army Col. Kathryn Spletstoser, who was Hyten's subordinate at U.S. Strategic Command, has accused Hyten of making unwanted sexual contact with her several times. While working for Hyten, Spletstoser was relieved of command amid a separate Army investigation that found she was a toxic leader.

Spletstoser told agents with the Air Force Office of Special Investigations that Hyten “was determined to crush her” when the Army investigation into her leadership style found the two had an inappropriate relationship. She claimed that hundreds of emails between her and Hyten as well as text messages on government mobile phones would prove her claims against Hyten.

Moreover, none of the witnesses interviewed by OSI said they saw Hyten and Spletstoser alone together when they traveled. One member of Hyten's personal security detachment told investigators it would have been difficult for someone to get into Hyten's hotel room without being noticed.

Investigators did not find anyone who said Hyten acted unprofessionally toward Spletstoser, but several witnesses described Spletstoser as hostile and explosive. One officer, whose name was redacted from the investigation, said Spletstoser, “Had a pattern of attacking the people she blamed for her demise and when unsuccessful in achieving her desired results, VICTIM [Spletstoser] moved onto the next target.”

Indeed, one witness recalled Spletstoser threatening Hyten in front of his staff for being left off an email by saying, “I can destroy you publicly, or you could include me, and I can help fix your mess privately.”

Hyten told investigators that after Spletstoser was fired, she threatened to hurt him or herself. He said she later apologized and claimed she was suffering from post traumatic stress and a traumatic brain injury.

Fox News obtained an Omaha Police Department report that said Spletstoser told Hyten shortly after she was fired that she threatened to kill herself unless he helped her within 24 hours.

Spletstoser told Fox News on July 30 that the police report had been taken out of context. “You're missing half that Omaha police report,” she said. “I never made a threat in person or verbally.”

Senators expressed strong support for Hyten at his confirmation hearing last month. In particular, Sen. Martha McSally (R-Ariz.), a rape survivor, said she believed Hyten was innocent of the allegations against him.

In a statement on Friday, U.S. Strategic Command said Hyten had been vindicated by the OSI investigation.

“Gen Hyten stands by his testimony and the results of the investigation which found the claims to be unsubstantiated,” a STRATCOM spokesman said. “We consider this matter closed.”