His wife detailed multiple instances of domestic abuse over the course of their marriage. 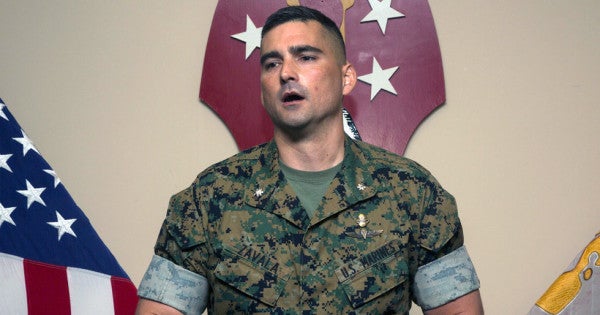 The former commander of the Marine Corps' 1st Reconnaissance Battalion has been charged with assault following a military investigation into allegations that he had struck his wife days before Christmas in 2018, a Corps official told Task & Purpose on Thursday.

Lt. Col. Francisco Zavala, 42, who was relieved of command of 1st Recon on May 7 after officials found he had committed alleged “misconduct,” will face a preliminary Article 32 hearing in early October to determine whether he will go to court-martial.

“Following the hearing, a determination as to whether charges will be referred to a court-martial will be made,” Maj. Kendra Motz, a spokeswoman for 1st Marine Division, told Task & Purpose.

Corps officials first learned of the allegations against Zavala on April 16 and opened an investigation the following day.

The investigation of Zavala, completed on May 3 and later released to Task & Purpose in response to a Freedom of Information Act request, showed that he had committed alleged “misconduct,” as the commanding general, Maj. Gen. Robert Castelvi, wrote in his endorsement. The report also confirmed some details of his wife's account of alleged domestic violence that Task & Purpose first reported in May.

As previously reported, Zavala was served with a request for a civilian restraining order in April alleging that his “unstable, violent, and harassing behavior” had made his wife “fear greatly for her safety,” his wife wrote in a sworn two-page statement.

Filed on April 4 as part of an ongoing divorce case, Zavala's wife detailed multiple instances of domestic abuse over the course of their marriage.

Task & Purpose does not identify victims of domestic violence.

In her statement, Zavala's wife said she had sought and received help from the Family Advocacy Program at Camp Pendleton, which provides counseling and victim advocacy services, and had made a restricted report about her husband's alleged abuse. She later converted the complaint to an unrestricted report, alerting Zavala's command, despite fears of retaliation from her husband since the allegations would likely affect his career.

During a brief telephone interview in May, Zavala told Task & Purpose that all the allegations against him were “false,” but declined to answer further questions, citing an ongoing military investigation.

“As a professional, my responsibility allow the investigation to go on and in time, I'm fairly confident I'll be exonerated of everything that's being alleged against me,” he said.

Zavala did not immediately respond to a request for comment on Thursday.

The wife's account of domestic violence mainly focused on the night of Dec. 23, 2018, days after Zavala had returned from a short deployment to Peru.

Earlier that day, Zavala told the investigating officer, the couple attended church together in San Clemente, then went out afterward for doughnuts with a fellow lieutenant colonel and their spouse. Later, Zavala and his wife went to a unit event at a yacht club in Newport Beach, he said, which finished at about 9 p.m.

On the way home, Zavala told the investigator that wanted to talk about the the battalion's deployment readiness coordinator.

“This was a conversation they had during the deployment,” the investigator wrote in an interview summary. The investigator also noted in the findings of fact that the she had expressed frustration “on more than one occasion” with the DRC.

“LtCol [Zavala] said that he asked her not to bring up the subject and that he didn't want to discuss it,” the investigator wrote. “He said that they drove home the rest of the way in silence, listening to the radio.”

The report noted it was about a 90-minute drive from Newport to Zavala's home in Oceanside. Although the investigative report redacted what happened next, according to his wife's April statement, soon after they returned home at around 10:30 p.m., the couple got into an argument that turned violent.

Zavala allegedly struck her in the face, took her phone away when she threatened to call 911, and then “slammed me against the wall,” she wrote. “Pinning me there while he screamed in my face, then threw me on the ground and held me down while he continued to yell in my face.”

Meanwhile, Zavala submitted a court filing on June 12 accusing his wife of attacking him. “Contrary to her allegations, on December 23, 2018 assaulted me and I fled our home to de-escalate the situation. My actions were exclusively defensive, focused on de-escalation of her assault, and ended with me fleeing our home. I have never taken offensive action against her.”

Still, in the Corps' investigative report, the neighbors — who are not named — confirmed Zavala's wife had stayed over that evening. In a phone interview with the investigating officer in April, the husband and wife neighbors explained that they were outside their home at around 11 p.m. looking at their Christmas decorations when Zavala's wife approached on foot.

Zavala's wife spent the night sleeping on their couch in the living room, the investigator found. Before she fell asleep, they prayed together “for God's peace and calm,” the report said.

The next day, after she had returned to pack up her belongings and leave for Colorado to be with her family, Zavala's wife wrote in her April statement that he “was in a bad mood, blamed me for what happened, and ignored me.” While she was packing in the bedroom, the statement said, Zavala pushed over their Christmas tree and tore their Christmas wreath off the door, throwing it in the backyard.

Given the report's numerous redactions, it was not clear whether this detail was addressed by the investigating officer, but receipts of airline travel to Colorado and hotel stays were included in the report. The report also included receipts for the purchase of two Apple iPhone 8s, which were allegedly broken by Zavala during another argument between the couple in October.

“On October 21, 2018 [Zavala] broke both my phone and his cell phone, slamming them to the ground while in a rage,” his wife wrote in her April statement. “He wrapped me in a bear hug and would not let me go when I told him I wanted to leave the house since I was scared.”

During another argument in the fall of 2018, Zavala allegedly picked up a gun and pointed it at his head, threatening to shoot himself, his wife wrote in her statement, “because I made his life so miserable.” He went on to threaten suicide on two additional occasions, she added.

“This makes me fearful about what he might be capable of doing to me. I wish to keep him away from me and have him not contact me anymore,” she wrote.

In addition to describing her fears of physical violence, Zavala's wife also alleged that he had sent harassing text messages “on an almost daily basis” after they had separated on Christmas Day. Zavala texted her that she was “filled with Satan's hatred” and claimed that she was being “influenced by 'the devil,'” she wrote.

“I have asked him seven times to stop contacting me via email, texts, and calls after he continually harassed me by sending me hundreds of messages,” she wrote. “My attorney was even forced to send [Zavala] a cease and desist letter to try and stop this harassment, but he continued to contact me after that and has even tried to contact my parents.”

In the investigative report, Zavala addressed the allegations in a heavily-redacted written statement on April 23, saying that he had “handled the strain of this ordeal through prayer and through the unconditional support of family.”

In closing, he wrote, “I reiterate my apologies for all of this stray voltage taking up valuable operational bandwidth for the Division. I have learned a great deal about myself, my personal decisions, and I have taken great pains to ensure that none of those decisions had the opportunity to erode my ability to command. I have great confidence that all of this personal acrimony will be behind me this Thursday and there will be no impact to mission from this point forward.”

Zavala was relieved of command weeks later on May 7. A press release about the relief said only that Maj. Gen. Castelvi, the division commander, had “lost trust and confidence in the commanding officer's ability to lead.”

Zavala is currently assigned to I Marine Expeditionary Force.

You can view the investigative report below: