The estranged husband of a 101st Airborne soldier killed over the weekend in what the Army is describing as an... 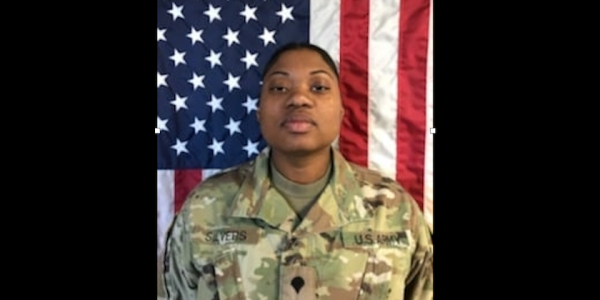 The estranged husband of a 101st Airborne soldier killed over the weekend in what the Army is describing as an “off-duty shooting incident” was taken into custody amid strong indications that he murdered his wife, The Leaf-Chronicle reports.

Spc. Brittney Silvers, of Jacksonville, Florida, was reportedly shot to death on the evening of Oct. 14 in on-base housing on Fort Campbell, a sprawling Army installation that straddles the Kentucky-Tennessee border. An affidavit obtained by The Leaf-Chronicle states that Silvers’ spouse, identified only as V. Silvers, was apprehended near the site of the incident and had confessed to being the shooter.

The Leaf-Chronicle additionally reports that a witness told authorities the shooting culminated a heated altercation that began when a man arrived at the apartment where Silvers was staying with a male friend and “started banging on the door.” The witness, a neighbor who was walking his dog at the time, allegedly heard an argument before seeing the man shoot Silvers in the back of the head.

The suspect then proceeded into a bathroom, where he encountered Silvers’ friend. A tussle ensued. More shots were fired and the friend was struck in the leg. His recollection of events was also included in court documents reviewed by The Leaf-Chronicle.

Those documents also allegedly describe how the assailant attempted to flee in a car parked outside the apartment but was intercepted by the neighbor and arrested by Fort Campbell police before he could get away.

The incident is still under investigation by the FBI and U.S. Army Criminal Investigation Command.

Silvers enlisted in the Army in 2011 and served as an automated logistical specialist with the 101st Combat Aviation Brigade. Court paperwork shows that she had “obtained a restraining order against her husband on Oct. 9 due to a prior incident involving a weapon,” according to The Leaf-Chronicle, which also reports that the couple were in the midst of a divorce.