Staff Sgt. Virgill Thorpe, assigned to the 3rd Armored Brigade Combat Team, 4th Infantry Division, was shot and killed by police officers after they responding to a domestic disturbance call in Colorado Springs on the evening of April 19, 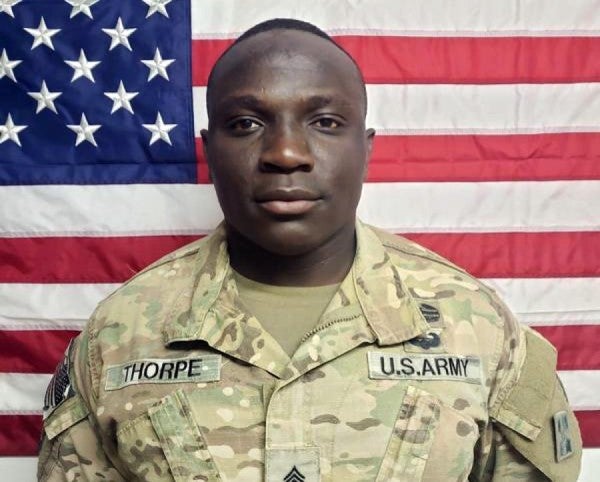 A 28-year-old cavalry scout assigned to Fort Carson was shot and killed by Colorado Springs, Colorado police officers earlier this month after allegedly pointing a rifle at them, law enforcement officials said.

Staff Sgt. Virgill Thorpe, assigned to the 3rd Armored Brigade Combat Team, 4th Infantry Division, was shot and killed by Colorado Springs Police Department officers after they responding to a domestic disturbance call on the evening of April 19, according to the El Paso Country Sheriff's Office.

Lt. James Sokolik, the public information officer for the CSPD, told Stars and Stripes that police arrived after a female caller “told them that the soldier was armed with a rifle.”

After verbally engaging with officers outside of his residence, Thorpe allegedly “ran back inside then grabbed a rifle and pointed it at the officers,” the El Paso Country Sheriff's Office said in a statement.

“Four officers fired from outside the residence into the basement window,” Sokolik told Stars and Stripes.

Thorpe was shot at least once before he was taken into custody by police and transported to a local hospital where he died of his injuries, according to the El Paso Country Sheriff's Office.

The four police officers involved in the shooting have been placed on routine administrative leave in accordance with CPSD policy as the sheriff's office investigates the incident.

According to Army Times, Thorpe joined the Army in May 2012 and deployed to Afghanistan between May and December of 2013.

“The Iron Brigade is deeply saddened by the loss of Sgt. Virgill Thorpe,” 3ABCT commander Col. Grant S. Fawcett told Army Times. “His tragic passing is felt throughout the formation. We will continue to focus on supporting his family through this difficult time.”