There are currently 47 positive novel coronavirus (COVID-19) cases aboard the USS Kidd (DDG-100), the Navy announced on Monday 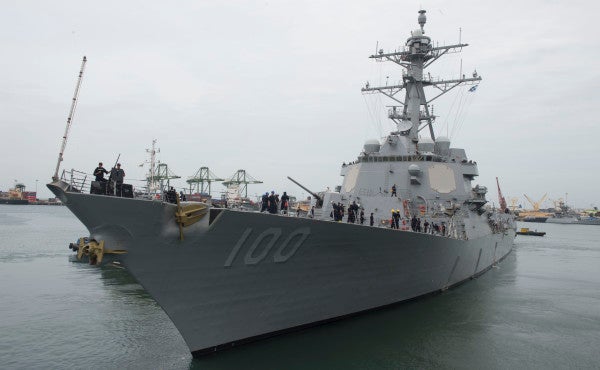 There are currently 47 positive novel coronavirus (COVID-19) cases aboard the USS Kidd (DDG-100), the Navy announced on Monday, up from just 18 on Friday.

The Navy had previously reported 33 positive COVID-19 cases aboard the Arleigh Burke-class destroyer as of Saturday.

With the rapid increase in positive cases over the weekend, roughly 15 percent of the Kidd's crew of 312 sailors has come down with virus.

As of Monday, the Navy had medically evacuated two Kidd sailors to the United States for treatment, the service said.

An additional fifteen sailors have been transferred to the amphibious assault ship USS Makin Island for monitoring “due to persistent symptoms.”

The Makin Island was dispatched to rendezvous with the Kidd over the weekend with a fleet surgical team and onboard intensive care unit embarked after completing a training exercise off the California coast, according to USNI News.

While at least two dozen other ships have confirmed cases of COVID-19, the Kidd is the second major outbreak on a Navy warship while at sea.

News of the initial Kidd outbreak came the day after the Navy finished testing 4,800 sailors assigned to the USS Theodore Roosevelt for the virus.

The Theodore Roosevelt, originally deployed to the Pacific last month, was forced to dock in Guam and quarantine its crew ashore to slow the spread of the virus.

Roughly 955 sailors on the Theodore Roosevelt tested positive for the virus, according to Navy's Monday release.

Originally deployed to eastern Pacific in early April as part of a fresh counternarcotics push in the region, the Kidd is currently preparing to return to port.

“The Navy is doing everything they can and we’re going to hope for the best outcome but we’re going take all the prudent steps that we possibly can,” Pentagon spokesman Johnathan Hoffman said on Friday.