Sorry, but the Big Stick is not exactly synonymous with naval supremacy at the moment 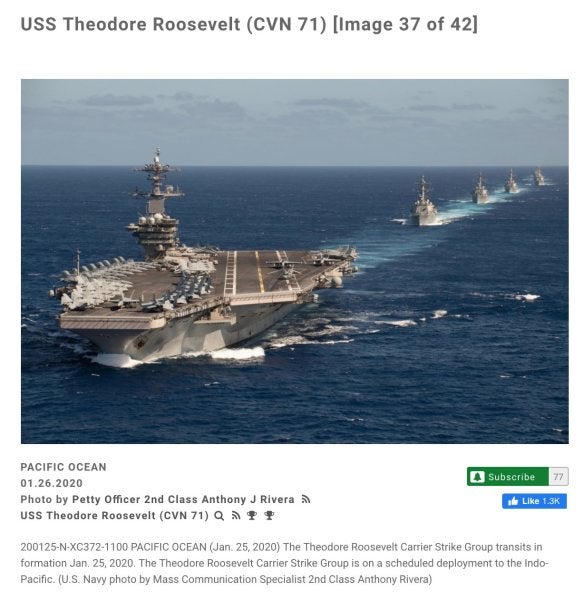 As far as optics go, this isn't nearly as bad as the 'Mission Accomplished' banner on the USS Abraham Lincoln, but it's pretty damn close.

With an aircraft carrier and destroyer sidelined by novel coronavirus (COVID-19) outbreaks, Defense Secretary Mark Esper took to social media to tout the U.S. military's naval supremacy in the face of the global pandemic.

“No other power on earth can match the capabilities and reach of the U.S. Navy,” Esper wrote in social media posts on Twitter and Facebook.

No other power on earth can match the capabilities and reach of the United States Navy. @USNavy #AmericaStrong pic.twitter.com/s26fRDlDeS

But there's a problem, obviously: to illustrate America's naval power, Esper (or his public affairs officers) opted for a photo of the USS Theodore Roosevelt, which is currently laid up in Guam with 1,102 positive cases of COVID-19.

This is maybe not the best visual for Esper to use for a few reasons.

First, it's not accurate: While Chief of Naval Operations Adm. Mike Gilday recently touted that six Navy aircraft carriers are currently under way in a rah-rah echo of Esper's digital hull-slapping, the Theodore Roosevelt is still preparing to go back to sea after a through scrub-down and quarantine effort.

Indeed, the Theodore Roosevelt photo isn't just inaccurate, but frustratingly tone-deaf when contrasted with actual recent photos from the vessel — namely this one of service members preparing to embark at Naval Base Guam after weeks in quarantine:

Second, the Theodore Roosevelt is currently less the symbol of U.S. naval power it should be and, at the moment, a symbol of the Navy's disjointed leadership. After all, the vessel's outbreak sparked a series of events that began with the ouster of its commanding officer and ended with the resignation of the acting Navy secretary. Like the USS Kidd, also sidelined by a COVID-19 outbreak, the Big Stick is not exactly synonymous with resilience at the moment.

On its own, the use of the Theodore Roosevelt might appear just a ham-fisted error, but its accidental use in Esper's message helps underscore just how desperate U.S. military leaders are to portray the Navy as essentially unmarred by the virus even as the service stops releasing data for positive cases on various vessels.

Indeed, despite Gilday's previously-mentioned touting of America's carrier force, the Navy had previously announced that sailors aboard 26 warships had contracted COVID-19 while sailors aboard an additional 14 vessels had recovered from the illness.

Beyond the Roosevelt and the Kidd, none of the affected vessels were at sea, a statistic that prompted Esper to boast just last week that only two outbreaks among the 90 vessels currently under way constitutes “a pretty good record.”

“The statistics show that the safest place to be is on a deployed Navy ship as compared to one that’s in port,” Esper said.

But as Task & Purpose previously reported, an April 30 report from the Defense Health Agency contradicts Esper's assessment, noting that DoD shipboard populations “are at increased risk of COVID-19” whether they're in port or not due to close quarters and cramped workspaces.

Esper can cheerlead for the Navy's resiliency as much as he wants, but the Pentagon will eventually reveal the truth behind how the service actually handled the COVID-19 crisis: On Monday, the Pentagon's Office of the Inspector General announced an investigation “to determine whether the Navy has implemented policies and procedures to prevent and mitigate the spread of infectious diseases, such as coronavirus-disease-2019 (COVID-19), on ships and submarines.”

One day, the Theodore Roosevelt will return to the high seas with the full might of its carrier strike group, a shining symbol of American power. But until then, Esper's digital tributes aren't coming across as the powerful message he probably intended.