After six months of sickness, death, and turmoil, the USS Theodore Roosevelt’s cruise is ending

The USS Theodore Roosevelt is expected to return to San Diego on Thursday, 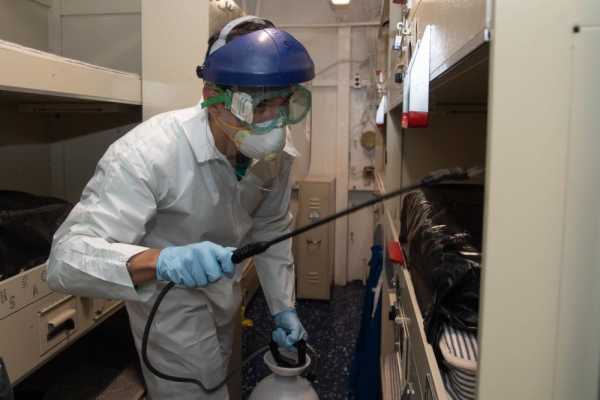 The aircraft carrier USS Theodore Roosevelt’s awful deployment – during which 1,273 sailors became sickened by the novel coronavirus (COVID-19), the ship’s captain was fired and then re-fired, and the acting Navy secretary lost his job for his epic meltdown while addressing the entire crew – is finally coming to an end.

The ship is expected to return to San Diego on Thursday, a Navy official confirmed to Task & Purpose. San Francisco Chronicle reporter Matthias Gafni was first to report that the Theodore Roosevelt’s ill-fated cruise is nearly over.

Two other ships that were part of the Theodore Roosevelt's carrier strike group have already arrived in San Diego, according to the Navy. The cruiser USS Bunker Hill and the destroyer USS Russell both returned from their deployments on Wednesday.

The Theodore Roosevelt lost two members of its crew during current deployment, which began on Jan. 17: Chief Petty Officer Charles Robert Thacker Jr., who died of the coronavirus on April 13; and Chief Petty Officer Justin Calderone, who died on July 2 after being medically evacuated from the ship for an unspecified medical emergency.

For the Navy, the Theodore Roosevelt’s cruise has made painfully apparent how quickly disease will sweep through a ship and incapacitate most of its crew. Capt. Brett Crozier fell on his sword by warning commanders in Pacific Fleet that his sailors would die unless most of the crew were placed in individual quarantine.

Crozier was relieved of command on April 2, shortly after the San Francisco Chronicle published a leaked copy of a March 30 letter he had sent by email to 10 people on an unclassified network. In justifying the relief of command, then-Acting Navy Secretary Thomas Modly exaggerated by saying Crozier had been reckless by copying “20 or 30 other people” on his email.

Modly ended up resigning on April 7, two days after he flew thousands of miles to make a speech to the Theodore Roosevelt’s crew, in which he said Crozier was “either A, too naive, or too stupid to be a commanding officer of a ship like this” if he did not think the media would get a hold of his letter. Modly also lambasted the crew for cheering Crozier as he left the ship.

Although Chief of Naval Operations Adm. Mike Gilday initially wanted to reinstate Crozier as the Theodore Roosevelt’s commanding officer following a preliminary inquiry into the matter, he ultimately decided against doing so, explaining that a wider investigation found that Crozier and others were too slow to get sick crew members off the ship.

But the investigation itself shows that when the Theodore Roosevelt pulled into Guam on March 27, precious time was lost because commanders were divided about whether to keep testing crew members, move them ashore into group quarantine, or place them in individual rooms.

The commander of 7th Fleet initially felt that should hotel rooms on Guam become available to temporarily lodge sailors individually, crew members would have to test negative for the coronavirus before leaving Naval Base Guam, the investigation says

However, Crozier had warned in his March 30 letter that group isolation would not stop the spread of the disease. In fact, two sailors who had been berthed in an open bay gymnasium became sick after being moved off the ship.

The situation eventually grew so desperate that five members of the ship’s medical department arguing that all of the Theodore Roosevelt’s sailors should be taken off the ship – and they vowed to make it public, according to the investigation. Separately, an unknown person tried to book hundreds of hotel rooms for the aircraft carrier’s crew.

It was not until March 31 that the commander of U.S. Pacific Fleet formally requested options to move sailors from the Theodore Roosevelt into hotel rooms.

When Gilday announced on June 20 that Crozier would not be reinstated as the Theodore Roosevelt’s commanding officer, nor would he be eligible for command, Gilday defended the decision made by Adm. Philip Davidson, the head of U.S. Indo-Pacific Command, to go forward with the ship’s port visit to Vietnam.

“There’s a number of things that Adm. Davidson was witting of that were justified – I think, that will bear the test of scrutiny,” Gilday told reporters at a Pentagon news conference.

Related: The Navy moved at light speed to fire a captain who did not ram his ship into another vessel

Related: The USS Theodore Roosevelt fiasco shows how paranoid the Pentagon is about China