“Now that’s how you send out one of the greatest captains we ever had!” 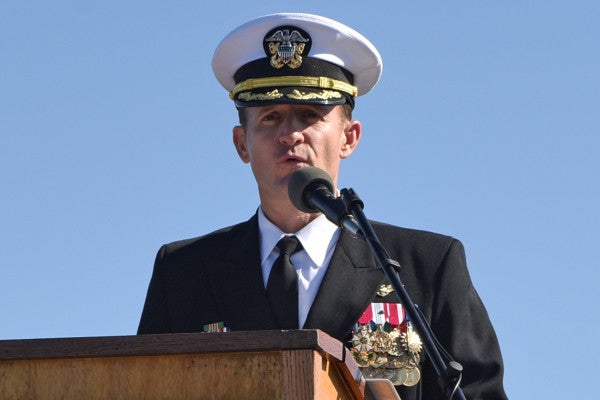 The crew of the USS Theodore Roosevelt gave the aircraft carrier's ousted skipper a loving farewell on Friday, assembling in the hundreds in the ship's hangar bay and cheering “Captain Crozier! Captain Crozier!” as the officer walked down the gangway to a car waiting pierside.

In one video, Crozier is seen stepping off his ship for the last time as CO and turning to give his still-cheering crew a wave before walking away.

“Now that’s how you send out one of the greatest captains we ever had!” said one sailor in a Facebook video first reported by Stars & Stripes. “The [greatest of all time], the man for the people.”

Videos of the send-off, which emerged on Facebook and Twitter Friday morning, come shortly after Capt. Brett Crozier was relieved of command by Acting Navy Secretary Thomas Modly over a leaked memo in which the captain urged his superiors to let him evacuate the ship as novel coronavirus (COVID-19) spread through its crew.

“Sailors do not need to die,” Crozier wrote in the memo. “If we do not act now, we are failing to properly take care of our most trusted asset — our sailors.”

After the San Francisco Chronicle on Tuesday published a leaked copy of Crozier’s memo, Modly claimed Crozier created a panic on the ship and among the crew’s family members by sending his memo to too many people, though the acting Navy secretary did not outright accuse Crozier of leaking the memo to The Chronicle.

Hero’s send off for Capt. Crozier, the commander of USS Roosevelt, who was relieved of duty after raising alarms about an outbreak of #COVID19 in the ship pic.twitter.com/TNGAurvlJu

Democrats on the House Armed Services Committee immediately voiced their disapproval of the ousting. While the lawmakers said Crozier may not have handled the crisis appropriately, firing him was an “overreaction,” they wrote in a statement.

“Dismissing a commanding officer for speaking out on issues critical to the safety of those under their command discourages others from raising similar concerns,” they added.

At least 114 sailors aboard the Roosevelt have now tested positive for COVID-19, Modly said, and the ship is now docked at Guam, where its sailors are gradually going into quarantine.

Modly said he anticipates hundreds more sailors will test positive for COVID-19 in the coming days.